Here on Footy Boots, we spend a lot of time talking about elite players wearing elite products. So it’s good to report that recognition at the lower end of the scale is thriving.

Just ask Matt Busby. Having the same name as the legendary Manchester United manager, Matt was always hopeful of success when he took over as boss of Hinckley Sunday League team Enderby Social FC.

And following in the footsteps of his namesake, his management skills have been rewarded with the title of Carling’s Pub Football Manager of the Year 2008.

Matt, 25, from Whetstone, Leicester, has managed Enderby Social FC for just one season but has already made a difference to the side who ply their trade in the Hinckley and District Sunday League.

The Carling Pub Football Awards, a national awards programme now in its second year, celebrates some of the often overlooked sporting triumphs taking place every weekend on pitches across the UK.

Teams, players, managers, referees, and fans up and down the country were asked to nominate their mates for the awards earlier in the year.'  The Awards were then judged by a sporting panel that included ITV Football Pundit Robbie Earle and Daily Mail Columnist Des Kelly.

Matt, who was nominated for the award by pal and team mate Richard Edwards, said: “To win the award is an absolute honour – I’d like to thank the team and everyone associated with the club for their support and contribution.” 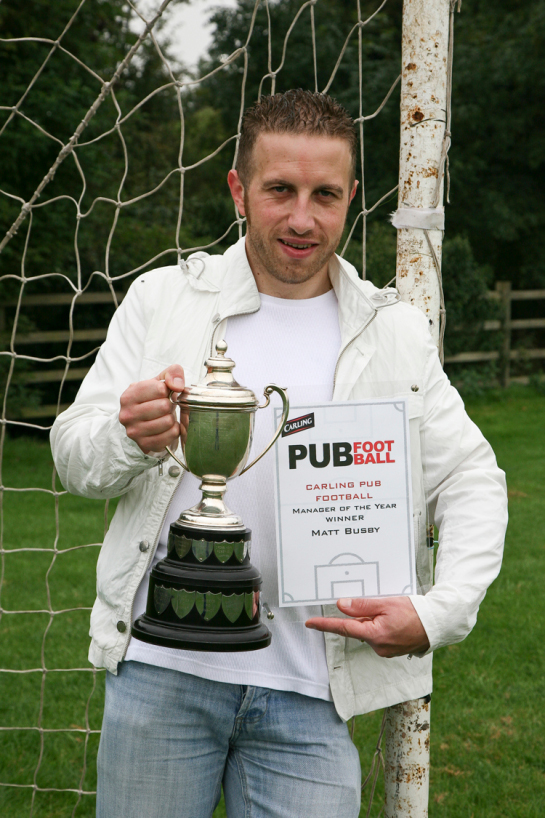 On his name sake Sir Matt Busby, Matt said: “My dad supported Manchester United – and obviously with my surname there was no other name to call me!'  I’ve got his autobiography and have taken my inspiration from the great man.'  I study his management skills and hope that the lads think that my approach is calm and positive too.”

Richard Edwards, who nominated Matt for the award and who has known him since their playschool days, said: “He has earned the respect as a manager from all of us.'  I can’t speak more highly of this man as a manager and a mate – there are only two Matt Busbys!”

On Enderby’s hopes for next season, Matt said: “Last season we won the Les Moore Trophy, came third in the League, and got promoted to Division Two.'  We’ve got three or four new players coming in this season, so I’ll need to make a few decisions on the team – but we’re a passionate bunch of lads who will make that step up.” 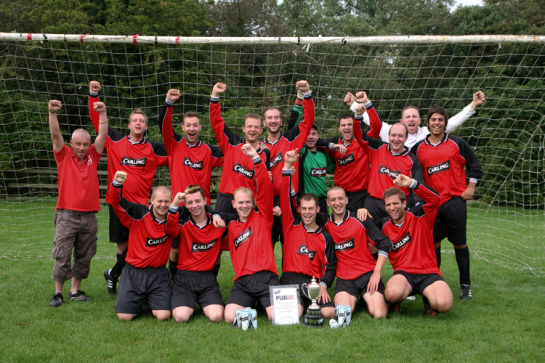 The award comes from ‘One – All’ Carling’s online community owned and shaped by pub and amateur football teams across the UK – over 4000 teams have already signed up. Registered teams can create their own free website to keep in touch with the rest of the team, complete player profiles, upload match highlights and debate the issue of the day with other teams.

Robbie Earle, ITV Football Pundit and one of Awards’ judging panel said: “We received nominations from clubs all over the country.'  It’s great to see Carling giving everyday footballers the recognition they deserve.”

Jim Shearer, Head of Sponsorship Carling, said: “Congratulations to Matt and Enderby Social FC.'  It’s great to be able to celebrate Matt’s success and hear about his dedication to the lads.

“Pub football is all about getting together with your mates every week and enjoying the game.'  The awards are the perfect opportunity to reward the teams and individuals who help to keep pub football alive.”

Written By
Felipe
More from Felipe
In a crowded market, led by huge companies with established brands, it...
Read More