In what will most certainly be the last big ‘coup’ of 2013 in the football boot world, Mario Balotelli and Puma have officially announced a new, long-term endorsement deal with the AC Milan and Italy striker.

Rounding out the story, Puma have also used this opportunity to officially announce the new ‘evoPOWER’ silo – replacing the PowerCat – with a limited edition Puma evoPOWER Stampa model, that will act as the pre-release ‘Camo’ model that Puma are fast making their pre-release trademark.

Puma have played a masterful PR game with the capture of the often-controversial Italian forward.

Not only do Puma now boast one of the most headline-grabbing athletes in Europe at the start of a World Cup year, but they’ve also managed to tie in the unveiling of a new flagship boot silo into the ‘mystery’ of the deal. 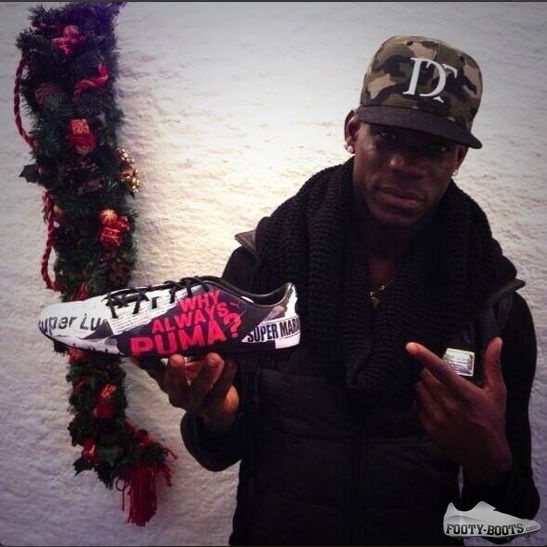 For anyone that wants more on the ‘long game’ execution of Puma’s plan to reveal Mario Balotelli’s football boots, you can read us gush about it here.

However, for anyone that missed out and wants a crib note version; Balotelli’s deal with Nike expires, everyone wonders where he’ll end up next, out of nowhere Balo laces up a pair of unknown boots covered in headlines about himself, Puma stay suspiciously non-comital in response and watch the hype train roll in to their station.

Now, for the final step, Puma have kitted out the physical forward with a pair of the evoPOWER Stampa limited editions with ‘Why Always Puma’ emblazoned on the side in pink; a nod to Balotelli’s infamous ‘Why Always Me?’ t-shirt which he revealed after scoring in a rout of Manchester United in his time at rivals City. 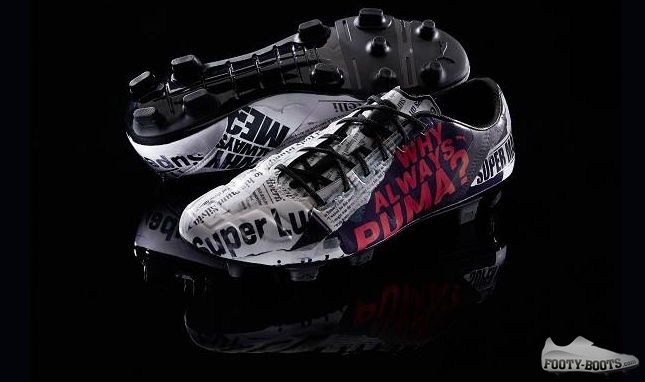 The boots themselves are expected to be Puma’s benchmark for a new generation of power. After middling between power and control in the PowerCat, Puma are hoping to revive the now-neglected category of boots with a proper beast of a boot in the evoPOWER.

The upper is expected to retail in a choice of leather or a revolutionary new synthetic that we have heard is something exceptional, with integrated elements built in to the striking zone. Under the hood is a mix of bladed and conical studs with a reenforced shank to enhance power transfer when striking.

Stampa is Italian for ‘Print’, and the connotations are obvious on a boot such as Balotelli’s evoPOWERs, which remain focused on chronicaling the Italian international’s antics on the field so far.

Another power play by Puma, the capture of Balotelli has great synergistic potential for their relationship as kit supplier to the Italian international team and caps off three extraordinary years for the brand, who are most definitely back to rumble with the big boys after over a dozen high-profile player acquisitions.