Last week, Footy-Boots brought you a huge Q&A session with Premier League keepers Tom Howard & Marcus Hahnemann to talk about the new T90 Tracer Premier League football. But after the main session, we spent some time in a one-on-one with Wolves’ big American stopper to talk about whatever we wanted!

Marcus is a man who’s very passionate about the equipment he uses, and was a real stand-up guy as well – which made for a great interview! 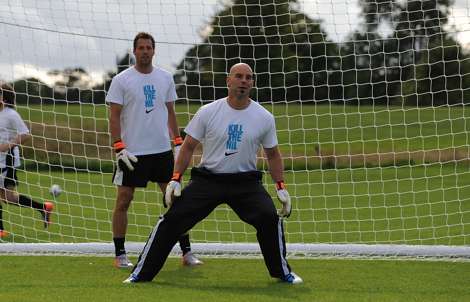 Hahnemann & Sorensen in goal – needless to say, nothing got past them!

FB: As a Veteran Professional what’re the main improvements you’ve noticed in footballs and the technology they use over the years?

MH: Well, they’re faster; and have got a little bit lighter too. It’s the normal stuff.

Obviously some companies went a different way, talking about that the World Cup Ĺ› that ball was moving around so much, even with pure Backspin it was still like this [replicates the Jabulani bobble with his hands]. The guys couldn’t control it.

I mean, with this Nike ball; it goes! You know; it’s fast, but it’s true – and that’s what everybody wants.

FB: Going back to the Nike ball, what do you prefer over competitors?

MH: Well, it’s firmer. I found other balls a little bit plastic-y. Like you say, it’s firmer – but it’s softer! I don’t know, it’s one of those things that you feel when you hit it.

Nike have focused on two main things this year, the concept of visual technology and maintaining the truest possible flight – which of these main concepts appeals to you the most?

Well, we’ve talked about the trueness of it, but also the colour scheme. The last design, with the circles around the side, sometimes it made it look like the ball was moving when it wasn’t, so there was some issues with that.

I mean, you could still pick it up – it just depends! Some people are really quick – I’ve got good vision, that’s why I’m a goalie, so I could pick up the spin.

But in the outfield, things can happen much quicker.

Now, visually, you can pick up on the spin pretty quick and know what the ball’s doing pretty quick! You know, you can read it in flight which you can’t do with other balls. 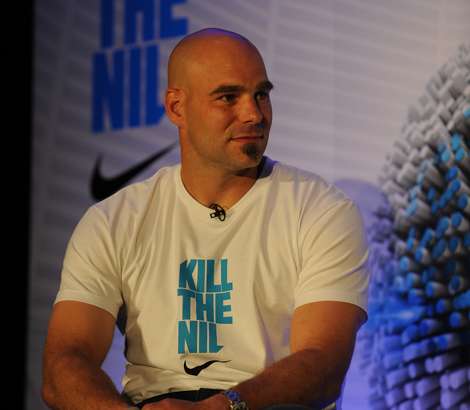 We raised the issue on our website of the balls being redeveloped year after year. Do you think reengineering stuff like the ball helps take the game to the next level, or do you sometimes wish they’d just leave it alone?

Well I think that aside from the things that Nike have outlined [referring to the visual science] the ball seems, to me, pretty much the same as it did last year.

I mean, you look at the World Cup and you see how many headed goals were there? Almost none!

You see how many balls bounce around off someone, then get volleyed into the goal? Plenty.

Moving away from the ball, and onto the season ahead; You were a new signing last season, managed to work your way into the first choice goalkeeper role; how do you look to improve personally on such a good season?

Well, obviously I want to play more games. Better goals against. That would help us, as we had a fairly high goals against last year. Just to be a little bit more solid – but everybody hopes for that.

As a team we always want to finish a little bit higher than we did last year, which was 15th. So, if we finish 14th or above, you know that’d be a success.

But for a team like us if we finish 17th or above that’s still a success. Staying up, ultimately, is everything. The money involved in being in the Premier League, staying up is almost enough. 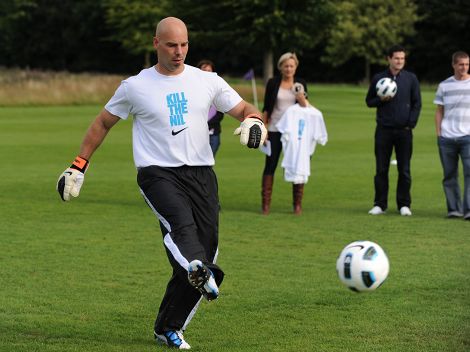 Roles Reveresed! Marcus let fly with a few choice strikes when Footy-Boots.com was between the sticks!

As a football boots website, I’ve got an obligation to ask you about your boots. What boots are you going to wear this season?

Well, I’ve been wearing the Total 90 Lasers for a while. A mix of different ones – I mean, we’ve got about 4 or 5 different bottoms that we can have on them.

Wow! Will you go for the Elite Series Carbon Fibre ones?

What do you prefer playing in?

Well, I’ve done some of those Multi-Stud (mixed-sole) ones on Nike iD. Nike want me to match the colour schemes – but for me I was making up all black ones with just a little bit of white on…

Yeah – but these guys weren’t too happy about it [nods at his Nike representative, who’s finding the whole thing very funny!]!

Why the mixed studs then? You rarely see pro’s in them at all.

Well, with the mixed studs you get that little bit of metal in there. So you get the comfort of a moulded with the extra traction.