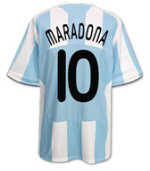 Diego Maradona has stunned the football world by announcing that he’s been offered the job of coach to the Argentine national side.

Maradona, often touted as the greatest player the game has ever seen, claims that he’s been in talks with the Argentina Football Association and that those discussion are due to continue this week.

The post is currently open after Alfio Basile resigned earlier this month after a World Cup qualifying defeat to Chile.

The offer attracted me a lot. As soon as it is confirmed I will start working.

The idea is to start working immediately after the official announcement with the players who are in Argentina and then take the first plane to talk to the ones in Europe.

As yet, there’s no official word from the AFA.

As captain, Maradona led Argentina to World Cup glory in 1986 but he was sent home from the 1994 tournament for drugs offences and since retiring has battled drink, drugs and weight problems.

Written By
Felipe
More from Felipe
Which boot got your vote for the safest football boot of 2009?
Read More