The largest ever global fan-survey has named Manchester United as the single most popular football club in the world, with over 659 million followers. 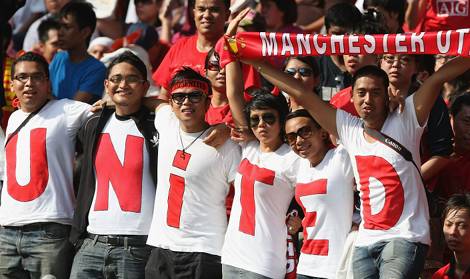 Carried out by leading market research company Kantar, the record-breaking survey – which took in 54,000 respondents from 39 countries – revealed that the Old Trafford club is the most followed around the globe.

What makes a fan? Well, the Marketing Director for Kantar said that the definition they used is someone “who unprompted, named Manchester United as a team they follow”, giving the Red Devils a 659m share of the 1.6 billion fans worldwide.

According to the survey – the largest ever of it’s type – Manchester United’s vast popularity stems from it’s huge following around the world.

Thanks to initiatives like the DHL Champ19ns Trophy Tour and pre-season tours of the United States, the Manchester United brand has been introduced personally to fans around the world who might have only had a passing interested in football/soccer before.

Breaking them down by location, the survey revealed that Manchester United have:

– 71 million fans in the Americas

Effective use of traditional and social media have also proved to be another important cog in the Manchester United machine, with a Facebook page that contains over 24 million fans (more than the Cowboys, Bulls and Yankees combined) and TV audience of 4.2 billion. That’s right, billion.

Can any team ever catch up to Manchester United in terms of popularity? If so, what would it take for them to get there?

Written By
Kyle Elliot
More from Kyle Elliot
We slip on a pair of Puma's Powercat 1 (with #RBGF rainbow...
Read More