So the goals-fest never materialized in the Nou camp last night as a determined Chelsea blunted the attacking threat of Barcelona. It’s all to play for at the Bridge next week.

As it is at Old Trafford tonight in the all-English semi final, 1st leg between Manchester United and Arsenal.

That said, the United manager Sir Alex Ferguson has stated that his greatest fear tonight is for Arsenal to score an ‘away’ goal. So, just as Chelsea kept out Barca, now it’s the turn of United’s back four to negate the attacking force of the visitors. 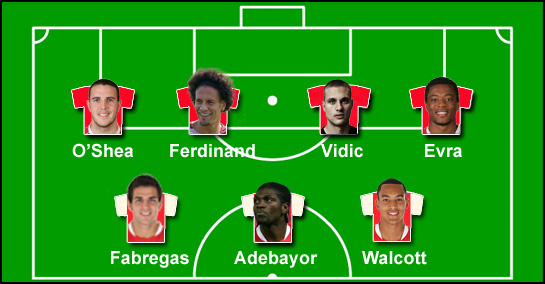 O’Shea is expected to be preferred to Rafael Da Silva and the fit again Wes Brown at right back. The Republic of Ireland defender has played in almost every position for his club over the years but it will be his defensive qualities that will be most needed tonight.

In the running for the PFA Player of the Year award, his early season form was terrific but he’s had a few wobbles of late. Tremendous in the air both at the back and in attack. Needs to keep Adebayor quiet.

Another PFA Player of the Year contender who, like Vidic, was pipped to the honour by United team mate Ryan Giggs. When on song, Ferdinand and Vidic are just about the best pairing around. Will want to repeat last season’s exploits when, along with Giggs, he lifted the Champions League trophy.

The son of a diplomat, they’ll be nothing diplomatic about how he handles Theo Walcott tonight. His instructions will probably mirror those given to Bosingwa who marked Messi last night. In other words, stop your man from playing. But must be careful as he’s on a yellow card.

Has some serious European form coming in to this game with 2 goals against Villareal in the quarter final. His first, in the away leg, has been touted as one of the goals of the season, a brilliant bicycle kick which has been replayed endlessly since. The boys at Adidas must have loved that. Wore the F50i in training yesterday.

A speed merchant in speed football boots. Like Adebayor, he’s on song with a goal in the FA Cup semi final against Chelsea and a great assist for Arshavin in the amazing 4 – 4 draw away to Liverpool. Has now proved his big match temperament as his England hat trick against Croatia showed.

Will be full of confidence after his 2 goals at the weekend against Middlesbrough in the Premier League, a game watched from the stands by Sir Alex Ferguson. His runs from midfield could be pivotal for Arsenal as the Spaniard looks to add a Champions League title to the European Championship winners medal he won last season.

Written By
Felipe
More from Felipe
This week Kyle takes a look at something a little different -...
Read More