Manchester City have unveiled the smart European Away shirt, tailored by Umbro, which the Premier League Champions will wear for the club’s assault on Europe in 2012/13. 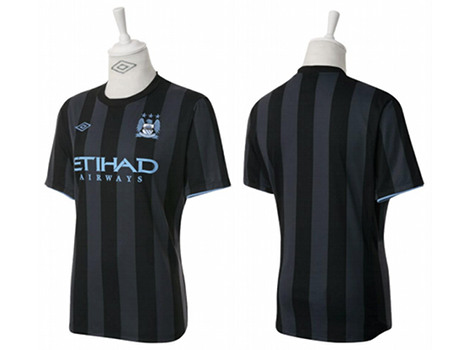 The black and carbon grey striped shirt is set to be worn in City’s European away games as well as selected Premier League fixtures.

The new third shirt features smart black and carbon grey stripes on the body and arms of the kit, with subtle vista blue trim on the inner stretch cuffs referencing the team’s home colours as they travel abroad. The same vista blue colour also features on the embroidered Umbro diamond and MCFC crest on the chest, and the sponsor’s logo.

The black colourway is inspired by kits worn by St. Mark’s (West Gorton) in the 1880s and nods to the night-time matches usually played in the Champions League. 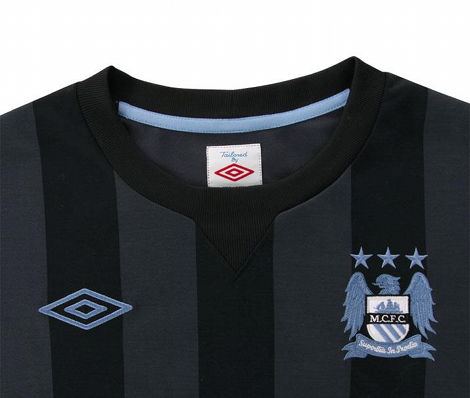 The neckline is inspired by an iconic Umbro Drill Top – a classic ribbed crew neck with a v-insert, which helps with fit and movement.

As ever, comfort and fit is a key factor in the new Manchester City shirt, with displaced shoulder seams and a shaped drop hem to give a smart look whether you’re on or off the field. Edge stitching or twin needle finishing is used to give the shirt a clean and crisp appearance.

The shirt is teamed with black shorts with the Umbro double diamond and club crest embroidered in vista blue. Black socks with a vista blue cuff and black hoops complete the kit. 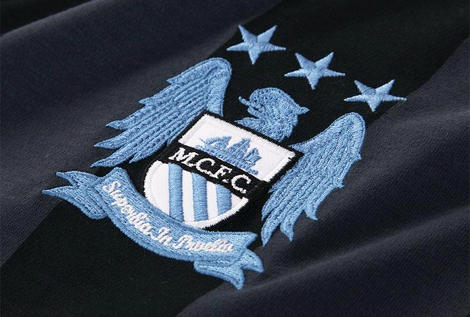 With the Champions League fixtures due to be revealed next week, we’ll soon know which cities this stylish shirt will be appearing in.

You can pre-order the new shirt from today through the club’s official stores and it goes on 14th September.

What do you think of the Manchester City European Away 2012-13?

Let us know on our shirt-o-meter!