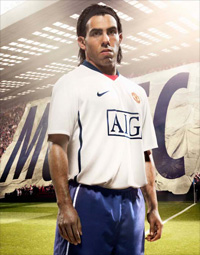 Manchester United have a agreed a four-year deal with American financial giant Aon Corp. They will now wear Aon Corp logo on the front of their shirts in a deal thought to be worth £80million.

United’s current sponsor AIG, an American insurance firm, said in January that it would not be renewing its £14m per year contract after it suffered huge losses during the global economic downturn. But, United were confident of securing an improved deal when their AIG contract ends in May 2010 and they looked to be proved right.

AIG will continue to have its name on the Manchester United’s shirts next season, before Aon take over the sponsorship in June 2010.

We are delighted to be entering such an important relationship with a company of the stature of Aon and to have its logo adorn our shirts from the start of the 2010-11 season.

Written By
Felipe
More from Felipe
PUMA teams up with United Nations and 12 African national sides in...
Read More