Manchester City’s executive director Taweesuk Jack Srisumrid has claimed that the club have had talks with Ronaldinho’s representatives. 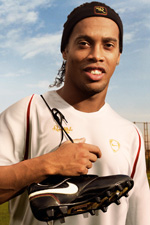 The 28-year-old Brazilian superstar seemed destined for a summer transfer to Serie A side Milan, but some reports claim a deal has stalled.

Man City have been rumoured to be interested in signing the Barcelona player, but whilst manager Sven Goran Eriksson has been keen to express his admiration for the player, he has also suggested that the player may beyond City’s pulling power.

However, it is reported in Tuesday’s press that Ronaldinho’s brother and agent Roberto de Assis met with Taweesuk over a deal.

What we will look to do in the summer is to further boost the squad, bring in top-quality, internationally recognised players.

Superstars would help fill the stadium and help our global branding. Primarily, we must win on the pitch – it can’t be a gimmick.

We’ve had discussions [with Ronaldinho] but we’ll see how that pans out.

We’ve looked at a host of players. Man City having discussions with superstar players used to be unimaginable, but not now.

It won’t be a galacticos strategy, with older famous names. We want to build around the team we have.

Written By
Felipe
More from Felipe
Arsenal were dumped out of the Champions League last night by PSV...
Read More