After unveiling Brazil-themed Solista’s and a new look for speed, Lotto round out their World Cup range of football boots with the new Stadio Potenza V.

Once-upon-a-time, Lotto boots were often a confusing mess; with naming conventions like ‘Ventos’ and ‘Legendas’ and ‘Fuoriclasse’ being better suited to an artisan coffee menu than a football boot silo.

But over the last four years, Lotto’s game plan has become much clearer to read; Zhero is speed, Fuerzapura is power and Stadio is heritage.

Maybe it’s World Cup fever causing some delirium over in Italy, but since the turn of the year, Lotto now have two speed boots, the Fuerzpura seems to have been axed six months after a new model was launched and the Stadio has picked up the slack. 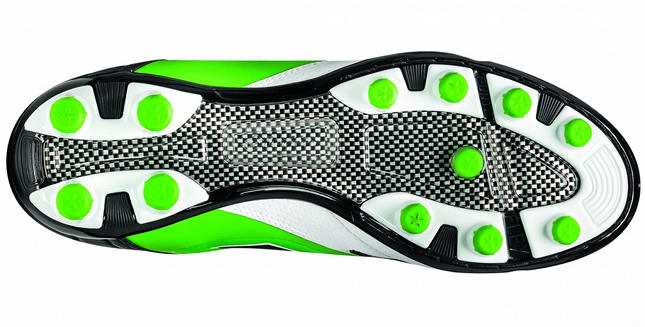 The Lotto Stadio Potenva V takes a little of the ‘modern-classic’ styling of the IV, and combines it with rubber strips akin to the Puma PowerCat 1.12.

As a result, the boot is marketed as a ‘heritage’ release, but boasts a synthetic upper in the forefoot, midfoot and heel as well as friction-boosting rubber stripes.

Now, the result is not by any means a bad boot – the styling is absolutely killer and the even use of the three colours that defined Lotto in the 90’s (Black / Green / White) look gorgeous on the segmented upper – but we’re curious to see how the Italian brand message the boot going forward, given it’s drastic departure from the ‘Heritage’ label that the Stadio name is so heavily associated with.

What are your thoughts on the Lotto Stadio Potenva V?

Drop ’em in the comments, below.

Written By
Kyle Elliot
More from Kyle Elliot
adidas offer a low-profile alternative to the Samba collection with a batch...
Read More