It’s all getting very Italian at Loftus Road.

Italian joint owner in Flavio Britaore, Italian manager in Luigi de Canio and now, if the players don’t do the business on the pitch, they are in serious danger of waking up next to a horses head or swimming with the fishes. You hear what I’m saying? Capiche?

Well perhaps, not quite that extreme.

But the Italian connection at Queens Park Rangers has been further strengthened after the club announced that next season’s official kit supplier will be Lotto Sport Italia. 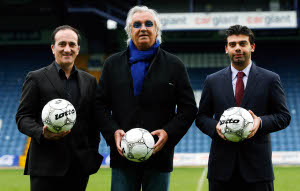 The deal could be worth as much as £20 million over five seasons, depending on the success of QPR as the club embarks on its mission to achieve Premier League football and represents the most lucrative sponsorship deal in the London club’s history.

Lotto Sport Italia will be providing new home and away kits and training wear for the first team through to the Centre of Excellence, as well as developing additional lines of stylish and fashionable QPR branded clothing and shoes.

The contract also includes a substantial annual investment for the duration of the contract into QPR’s ‘Football In The Community’ scheme, which will assist the department’s continued efforts to improve the standard of life for people within the local area.

Andrea Tomat, President of Lotto Sport Italia, said: “We cannot wait to start this new alliance with a team that we feel very close to Lotto. This is an important partnership which will enhance the brand awareness of Lotto not only in the UK but also at international level, thanks to the worldwide media coverage of English football and in particular of Queens Park Rangers and the club’s new owners.”

“This partnership with QPR will also see both parties develop mutually-beneficial commercial ideas along with new product lines – also for leisure wear – inspired by the team with an unmistakeable Italian touch.”

Flavio Briatore, chairman of QPR Holdings Limited, added: “This is the first significant new partnership for the club since I became involved, and I am very excited about it. Lotto Sport Italia are the perfect fit as our new kit supplier. As a brand, I am certain that their involvement will benefit us on and off the pitch. 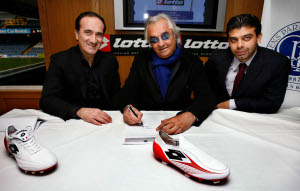 “I am delighted with the design of the new team strip, which maintains the QPR tradition of blue and white hoops. I know how important it is to the fans that the hoops remain, and that was always going to be the case.”

The new kit design for next season will be revealed at a later date. Compulsory attendance by the media will be called for and for those hacks who don’t pitch up, they can expect a visit from a chap who’s middle name is ‘The’.

Written By
Felipe
More from Felipe
Watch Beckham throw himself studs up at his opponent, before getting a...
Read More