After the launch of the optically-baffling Solista, Lotto are revamping their range at the start of the season with yet another new release; the Lotto Fuerzapura IV 101.

Bringing a pared back design and a new naming convention (the top boot in the range is now the 101, with the 300 the mid-range takedown), the Fuerzapura is bringing things back to basics on it’s latest model.

Originally launched back in 2010, Lotto originally envisioned the Fuerzapura as a power boot – it’s even in the name, which translates to English as ‘Pure Force’.

However, Lotto are nothing if not adaptable; and with power boots falling out of favour as of late – adidas focusing on a more ‘control’ oriented Predator and Nike retiring the T90 – Lotto are making the Fuerzapura a little more focused on touch and control.

The upper is a soft, water-repellent kangaroo leather – a material that is becoming more and more scarce in the boot market – for a natural, assured touch on the ball.

Being one of Lotto’s more technically advanced shoes, the Fuerzapura IV 101 uses a combination of quilted stitching an traditional cross-toe seams to help the boot crease in the correct areas without over-stretching. 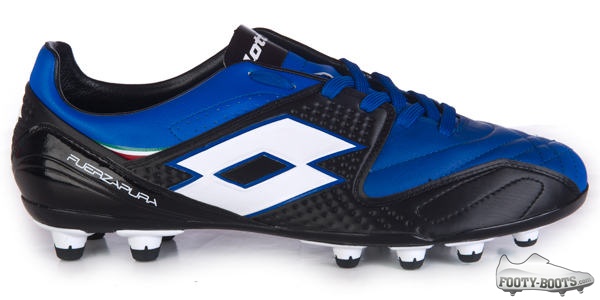 A feature since the Fuerzapura II, the additional microfibre panels on the lateral and medial sides of the boot allow additional durability and improved fit thanks to their integration with the lacing system.

Once a boot packed to the rafters with gimmicks like massaging insoles and Twist’n’Go studs, the Lotto Fuerzapura IV 101 puts far more faith in the basics, with a simple conical-stud soleplate that integrates the tried-and-tested Puntoflex shape for a more responsive toe-off.

This reduction in bells and whistles accompanies a drop in price, too, as the Lotto Fuerzapura IV 101 is set to hit stores in the UK for Ł99.99 – not too shabby for a top level k-leather boot – and a US SRP to be confirmed soon.

Available now in this rather attractive Black/Blue colourway combo, we think Lotto’s back-to-basics approach on the new Fuerzapura is certainly a bold one.

Stripping back the clutter from previous models to focus on touch, fit and classic traction are all winning moves, but we wonder whether it’s still a little highly priced with boots like Umbro’s Speciali 4 offering more or less the same for even less.

Let us know what you think in the comments, below!