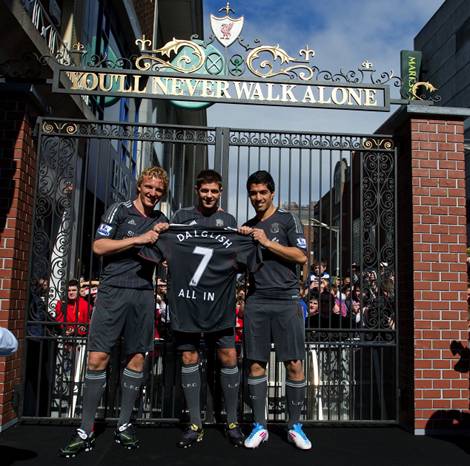 adidas brought the best of Anfield to the Irish capital for the day, bringing replicas of the famous Shankly Gates, a dugout and road signs in place for Irish Liverpool fans to really feel at home, despite being on Mary Street, Dublin.

There’s historically been a strong support in Ireland for Liverpool FC, and adidas capitalised on that presence for the launch of the New Liverpool Away Shirt 2011-12.

”It is great to come to Ireland and meet the fans,” Liverpool captain Steven Gerrard said. ”Liverpool has always had a huge number of Irish supporters and I know thousands come over to Anfield for every game, which in terms of time and the costs involved, is a big sacrifice. As with all of our fans, we appreciate their support and the club is lucky to have the best supporters in the world.”

”The links between the city of Liverpool and Ireland go back through history and the Scousers and the Irish are very similar – every second Liverpudlian seems to have some Irish ancestry. There is a strong connection in my family as my cousin, Anthony Gerrard, has played underage for Ireland and is hoping to break through to the senior side after a good season at Hull. They have a lot of good players and one of the most successful managers in football (Giovanni Trapattoni).”

”'ĹžThe club has also been lucky enough to have had some great Irish players over the years. You can go back recently to Steve Finnan, and then before that there would have been the likes of John Aldridge, Steve Staunton, Ronnie Whelan, Ray Houghton and Steve Heighway, to name a few.”

Gerrard also expressed delight at the news of Kenny Daglish˘ new three year deal with the Anfield club, which ensures he will take charge of the Reds until the end of the 2013-2014 season.

”Clearly, we are delighted with the news. Since both Kenny and Steve (Clarke) arrived in January our results have transformed. Kenny has a long association with the club and he is a fantastic man manager to play under.”

”The team is doing really well at the moment and the performance on Monday against Fulham was excellent. It˘ an achievement in itself to even be talking about European football now. Personally, it˘ disappointing not to have been involved due to injury but I just need to focus on getting back fit and looking forward to next season.” 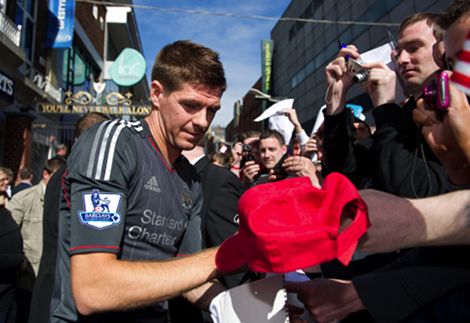 Another man happy to be in Ireland was Uruguayan star Luis Suarez, who has had a huge impact since he signed for the club earlier this year,'  after missing his national side˘ trip to Dublin to face Giovanni Trapattoni˘ side in March.

”It is great to visit Ireland. I was due to come here in March with Uruguay but I was injured so could not travel. It was a very exciting game with both teams playing good football and Ireland looked to have a lot of good young players.” Suarez said.

”I have been very happy with how I have settled in the Premier League. We had a good win on Monday night against Fulham and the team played well. Working with Kenny Dalglish has been brilliant because he is a great manager who has won titles before as a player and a coach with the club. With him as our manager next year, I am sure we will be challenging for the league once again.”

Completing the trio of stars brought to Ireland by adidas was Dirk Kuyt, who was on the score sheet for the Reds once again last Monday in their 5-2 victory against Fulham.

”I was here in Ireland in 2006 playing in a friendly for Holland.” the Dutch forward said. ”I would have liked to be coming to Dublin next week for the Europa League Final, but it˘ all about looking forward for us now and trying to make sure we beat Spurs and Aston Villa in our final games to secure European football again for next season.”

”I have had a good season personally, but it is not about Dirk Kuyt, the team is the most important but I believe we can qualify for Europe and finish the season on a high.”

The New Liverpool Away Shirt 2011-12 is now available to order!

Written By
Ramsay
More from Ramsay
British brand Umbro have raided the paint store again, this time for...
Read More