Manchester City’s new signing Joleon Lescott has spoken out about his dwindling relationship with Everton boss David Moyes after completing a £22m switch to Eastlands. 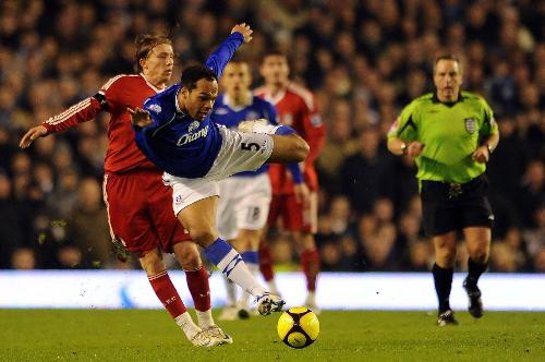 New shade of blue for Lescott.

In the build-up to the transfer going ahead, Moyes claimed that Lescott had showed a ‘poor attitude’ towards Everton and that he lacked respect for the club that had given him his Premier League chance.

The England man has disputed these comments though by saying that he believes them to be ‘inaccurate’. Lescott said he would deal with them more thoroughly at ‘a later date’, but admitted that he was ‘disappointed’ with the way he was being spoken about.

Lescott didn’t play much for The Toffees in pre-season after making it clear that he wished to move to Manchester City. Despite this though, he played a part in the humiliating 6-1 defeat to Arsenal on the opening day, a performance he admits wasn’t his ‘finest game for Everton’.

He was then dropped for the Europa League match with Sigma Olomouc as Moyes started to get frustrated with his attitude. The player himself is convinced that he ‘didn’t disrespect any of the players’ during his final few days at the club though and that he always kept a ‘good rapport with the fans’.

The 27-year-old is only focused on doing well for Manchester City now, saying that his ambitions and the club’s are very similar. As we all know, big things are planned at Eastlands and Lescott is clearly excited to be a part of it.

Speaking about what the team can achieve, he said that they are more than capable of breaking into the top four this season, as the Premier League odds show. After a summer of big-spending, Lescott is convinced that the squad is ‘well equipped’ to have a very successful campaign.

Mark Hughes’ men have certainly started brightly with two wins from two games and they will be looking to make it three out of three when they travel to Portsmouth on Saturday where Lescott will be hoping to make his debut.

Written By
Felipe
More from Felipe
Russia score 32 goals in a day when 55 goals were scored...
Read More