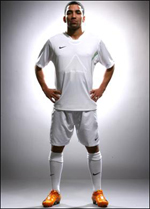 Tottenham Hotspur winger Aaron Lennon has committed his future to the club by signing a new contract which will keep him at Spurs until at least 2014. Such a deal ends speculation that the former Leeds man would be on his way out of White Hart Lane this summer.

Lennon has been in fantastic form of late, meaning that Tottenham were very keen to tie him down to a long-term contract. At 21-years-old, Lennon is showing huge potential and there is no doubt that he has an almost unlimited amount of talent with the ball at his feet.

One of the most significant things is that Lennon is constantly improving. This season has been his best yet with his end product a lot more effective than it was a couple of years ago. As for the timing of the deal, it seems no coincidence that it has come shortly after rumours about Liverpool being interested in the player. Tottenham would have been keen to avoid a summer of speculation, so that is why they have acted now.

Speaking about the new five-year-deal, Harry Redknapp said that he was ‘delighted to have him’ at the club. The Spurs boss says that Lennon is still ‘learning the game’, but has ‘real ability’ that he will now be able to show in a Tottenham shirt.

Having sorted out his future, the next step for Lennon is to get himself back in Fabio Capello’s England squad. He hasn’t figured of late, but Redknapp believes that it is only a matter of time before his superb form is recognised.

For now though, Lennon will be focused on all things Tottenham. The England recognition will come if he continues to perform for his club.

Next up for him is to try and help his team get three points against Chelsea at White Hart Lane this weekend. It is likely that he will be taking on England defender Ashley Cole for much of the game, so perhaps if he has one of his better games against him, Mr Capello will come calling.

Written By
Felipe
More from Felipe
Blackburn held at home by Spurs with Berbatov and Gamst Pederson on...
Read More