Fighting for a place in England’s staring eleven, making up part of one of the Premier League’s strongest defences and whipping in free kicks are all in a day’s work for Leighton Baines.

And whilst the rigours of Premier League football are something that the Everton man takes in his stride, we found out lacing up a pair of bright football boots like the new Samba Pack Predators isn’t something Baines has always found as easy!

– What are your first thoughts on the new Samba Predators?

They look very lively and interesting!

For me, the most important thing has always been the feel – that’s why I’ve always worn the Predators.

I’m lucky in the sense that I’ve gotten to see them evolve almost. From when I first started wearing them, it’s a different boot.

You can wear them straight away, too. There used to be a wearing in process but these, you can slip straight into them and as I say, that’s the most important thing.

– Bright boots like this definitely get you noticed on the pitch, are you a fan of neon-coloured boots like these?

Initially, you know, you come from wearing black boots all the time it took me a little bit longer than most to go into a white boot or whatever.

Now, it’s evolved again. Once it was just a white boot – now there’s a whole variety of colours!

It’s not something I’ve ever been mad keen on, but a lot of the lads love the different colours. As I said, how I feel in them is the most important thing to me.

I know my two little boys are so excited when there’s new boots coming out, it’s the thing for the kids to get into as well.

– Does a lighter boot effect your technique?

No, the thing about the Predators – and the thing I like about them – is the balance.

There’s some boots you pick up and there’s just nothing to them – no real feel and no protection. Whereas the Predators are really light and have that sense of contact with the ball.

– Do you remember your first football boots?

I don’t remember my first boots, but I can remember wearing this red boot – and that was unheard of back then.

I don’t know, someone like John Barnes had worn them and I bugged my mum and dad for ages that I wanted them and they went out and got them.

I went to training with the local team I was in and all the other kids took the mickey out of me all game for wearing them.

I thought they were the best thing ever when I saw them and once I got them and the rest of the lads weren’t having them I was just like¦aw.

My mum and dad weren’t best pleased – I think they saved up a few weeks to get me them. 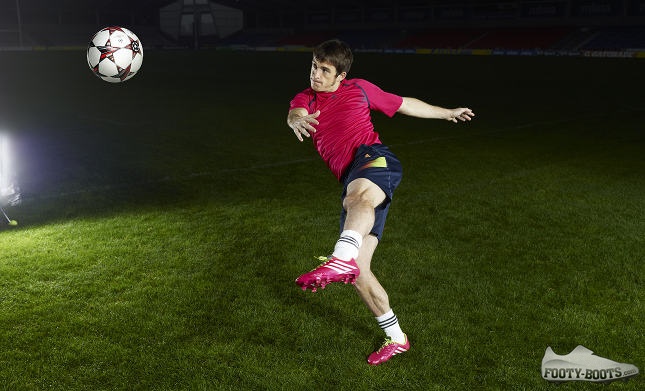 – New Manager, new tactics. Will that help or hinder in a World Cup year?

Well he’s bringing in a new style and that’s likely to help. We’re doing things differently and that only adds another string to your bow, if you like. We’re a lot further down the line from where we were pre-season in terms of knowing the manager and implementing his ideas.

– Who was the one player you remember most fondly from World Cups growing up?

The ones I think for me was Zidane. Watching Zidane play is something we used to get excited about. A but like it is with Messi now; if that player is playing, especially in a big tournament, you’re going to sit down and watch it.

Zidane scored some big goals in big moments – some controversial moments, too – but that was part of the appeal. The France team at the time was so exciting.

– You’ve had a chance to play with the new World Cup ball – the Brazuca – how are you finding it on set-pieces?

It’s great. As with a lot of new balls it’s got texture on the outside of it, and when it comes to taking free kicks it helps you get that contact on it and makes it easier to get the ball up and over the wall.

For those involved in the World Cup squad, we get to train with the ball which is obviously very important.

We often change balls, maybe just for a day around cup games, but it’s important to get that preparation in.

Some balls travel differently – I don’t know why – but some have a slightly different flight or bounce, and it’s important to get used to it.

Written By
Kyle Elliot
More from Kyle Elliot
Barcelona wonder-kid Bojan switches his boots for the third time in a...
Read More