Diego Maradona has overseen automatic qualification for Argentina which was confirmed after their 1 – 0 win away to Uruguay. 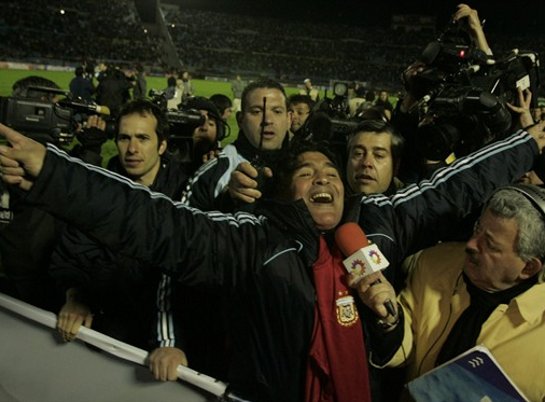 It’s been a troubled campaign for the former champions but 6 points from their last two games means Argentina finish in 4th spot overall in the South American group with Uruguay in 5th and now facing a play-off against Costa Rica.

Mario Bolatti settled a tense and scrappy game, side-footing home after a goalmouth scramble on 84 minutes.'  The goal came moments after the home team was reduced to 10 men with Martin Caceres dismissed for two yellow cards.

Uruguay’s play-off opponents Costa Rica went 2 up against the USA but were pegged back as the game finished all square at 2 – 2. That meant that Honduras, who won 1-0 in El Salvador, took the third automatic place for South Africa behind the US and Mexico in the North and Central America and Caribbean qualifying group.

Over in Europe, Slovakia qualified for their first World Cup finals after beating Poland 1-0. The Slovaks overcame some apalling weather and a paltry crowd to finish top of Group 3 courtesy of a third-minute own goal by Seweryn Gancarczyk and some key saves from Jan Mucha.

And Switzerland got the point they needed to qualify in their final match against Israel but not without a struggle – Ottmar Hitzfeld’s side were hanging on even after their hosts had Avihay Yadin sent off after 59 minutes.

Written By
Felipe
More from Felipe
Drogba, Cole, Arshavin and others on hand as Nike and RED unite...
Read More