Following the reveal of Warrior’s ‘What Lies Within’, we took stock of what Warrior has achieved since November. Launching two models of boots, the Skreamer S-Lite and K-Lite, Warrior have signed two Premier League talents, releases numerous viral vids and even roped in personalities like Robbie Fowler and Vinnie Jones to promote their products.

But are they set for a move to eclipse all that has gone before by snaring Vincent Kompany into a long-term deal? 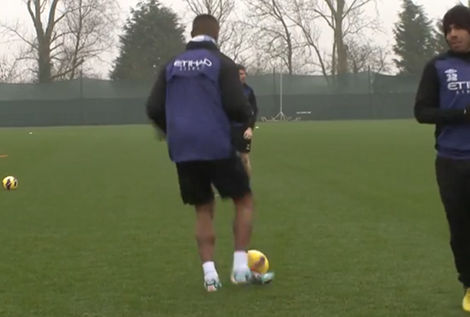 Whilst the marquee signings of players like Aguero, Dzeko, Balotelli and David Silva have been the ticket-sellers for Manchester City, the beating heart of the team has been in powerful centre-back Vincent Kompany.

A leader on the pitch and a role-model off it, it’s no surprise the club captain was Nike’s chosen face to reveal their acquisition of the Manchester City technical supplier contract as they prepared to sell off Umbro. 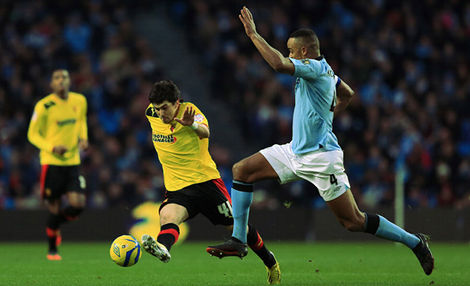 But a surprise coup could be on the cards for Warrior Football, as a number of signs suggest they are in the later stages of agreeing a deal with the Belgian international.

The 26-year old centre-back has long been a wearer of the Nike T90 Laser range, but in City’s last two games – against Watford and Arsenal – the centre-back has blacked-out his football boots – a sure-fire sign his contractual obligation to Nike has come to an end.

Prior to the Arsenal game, Kompany was also captured by cameras wearing the Skreamer in first-team training with the blues.

Close-ups also reveal they’re the same Skreamer S-Lite with K-Leather vamp that we’ve seen both Marouane Fellaini and Jonas Gutierrez wearing, implying they were produced by Warrior for Kompany, rather than a pair he’s picked off the shelf at a local sports shop.

Some YouTube and Footy-Boots commenters have also noted the light blue-shirt wearing metalworker in the Warrior ‘What Lies Within’ video also bares a resemblance to the strong-jawed Kompany. Whether it was meant to be a role played by Kompany or is simply a co-incidence will likely be one of the industry’s unsolved mysteries.

Also, @Warrior_FTBL follow @VincentKompany on Twitter. But they also follow just about every other Premier League player, so we wouldn’t put too much stock in that!

Would the signing of a Premier League-winning Captain be a boost to Warrior’s steadily-growing stable of players? Is the Belgian a good fit for the brand?

Written By
Kyle Elliot
More from Kyle Elliot
adidas deck out the Brazuca with a golden colourway for the final...
Read More