NBA Superstar and Nike (RED) ambassador Kobe Bryant hopped over to South Africa this week (You can do that when you’ve just clinched your 5th NBA Championship) to see the money raised by the Product (RED) scheme in action. 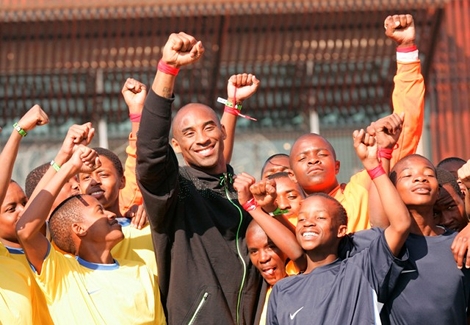 Starting with a trip to Nike’s brand new Soweto Training Centre, the LA Lakers man took a tour of the facilities, before having a kickabout with the kids who were on the pitch at the time.

Kobe has been a leading campaigner in the Nike (RED) cause – wearing his Red laces with pride in the NBA, so he was understandably keen to see the cause having such a positive impact on the community.

Next on the 6’6 Shooting Guard’s PR Trip was a visit to the Life Center in Johannesburg. There, he issued a challenge to the Brazil national team over the giant LED message boards that Nike have set up – just like Footy-Boots.com did last week!

Written By
Kyle Elliot
More from Kyle Elliot
Nike dial it back on the colour front and add a leather-like...
Read More