Harry Kewell is swapping his lucrative football boot deal with Adidas, in favour of up and coming Australian brand Nomis. 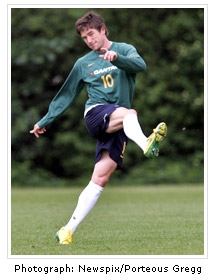 In 2004, Kewell rejected offers from Reebok and Nike and plumped for an Australian record sponsorship deal with Adidas. His deal with Adidas saw the German brand pay Kewell a percentage of football boot sales, said to be in the region of £1.3 million.

Kewell, beginning his latest comeback from injury, is set to fly back to the UK from Australia, where he had foot surgery. Unfortunately, it looks likely that Kewell will have to wait until March 2007 before he will be gracing the Premiership in his Nomis football boots. That’s due to a combination of foot and groin injuries which have sidelined him since this summer’s World Cup.

Kewell is said to be wearing the Nomis football boots without receiving any sponsorship payment from Nomis.

Written By
Felipe
More from Felipe
West Ham have finally sourced a new shirt sponsor, along with a...
Read More