You know how it is. You’re playing rubbish, the team is down at the wrong end of the table, your manager resigns by text message (brave !!) after which you nearly manage to hold the European Champions to a goal less draw before hammering the League’s bottom team.

Rather than deflate Sunderland, Roy Keane’s departure looks to have had the opposite affect and West Brom were the unfortunate victims at the weekend. The Black Cats ran out winners by 4 – 0 with our Footy Boots weekend star, Kenwyne Jones, grabbing 2 of the goals.

Jones, who wears the Puma v1.08 tricks boot, set Sunderland on their way with the first 2 goals of the game. His opener came on 22 minutes when Andy Reid crossed from the right for Jones to power a diving header beyond England keeper Scott Carson.

Two minutes later, Jones doubled his personal and team tally as he tapped in unmarked after Carson had saved from both Djibril Cisse and Reid. 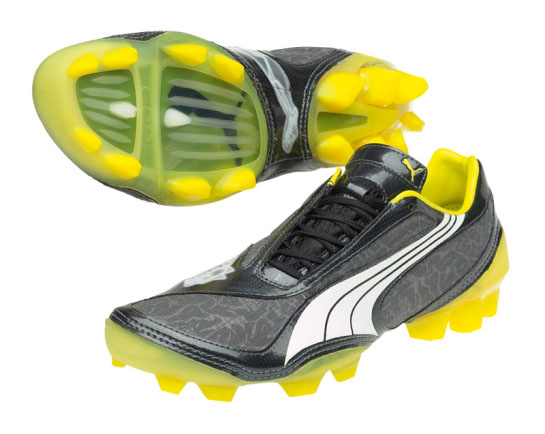 Reid made it 3 before half time with Cisse rounding off the scoring in the second half.

Sunderland are still in the bottom three, but are now level on points with Manchester City and just 1 point behind West Ham, Spurs and Newcastle.

I am not even thinking about the job, and that’s the truth. If it’s there, it’s there; if it’s not, it’s not.

We have a big game next week at Hull and all I can do is focus on what we want to do there.

If we win games, we win games. That’s fantastic for Sunderland Football Club, and we need that.

We need to get out of the mire we are in just now, and that’s one step to it. But there’s a lot to go.

Created with one thing in mind – to get you to the ball even faster.

Outsole: Two-pieces TPU outsole, conical screw-in studs. Studs suitable for use on soft natural surfaces. The v1.08 Tricks is showing the inside on the outside. The upper uses a thin lightweight textile material reinforced by a thin layer of microfibre for improved protection and durability. The two-piece split outsole further reduces weight whilst enhancing the fit. The internal chassis is the spine of the v1.08 Tricks. Its double – density TPU frame provides stability utilizing a carbon fibre plate to keep weight down.

Written By
Felipe
More from Felipe
Terry set to lose up to Ă‚Ĺ4m in sponsorship deals.
Read More