If you’re like the Footy Boots team, your experience of 5 a side football is probably a week night kick about with some mates preceding a large amount of beer or perhaps a Sunday morning get together following a load of beer.

Either way, the results are probably mixed at best.

On the continent however, the indoor game or ‘Futsal’ is massive with leagues and well paid professional players, who like their outdoor colleagues, have well backed shoe contracts.

The game’s name is derived from the Portuguese futebol de sal ão and the Spanish fútbol sala/de salón, which can be translated as ‘indoor football’.

Futsal, which can be traced back to 1930, is played between two teams of five players, one of whom is the goalkeeper. In addition each team may have 7 substitutes. Unlike some other forms of indoor football, the court is delimited by lines, and not walls or boards that players can use to rebound the ball. Futsal is played with a smaller ball with less bounce than a football.The emphasis is on improvisation, creativity and technique.

And the undoubted star of European Futsal is the captain of Spain, Javier Rodriguez. 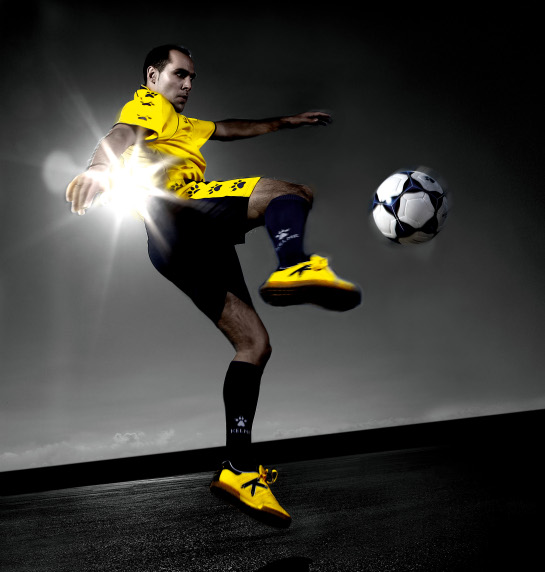 Last November, Rodriguez led his Spanish side to a fourth European title, as they beat Italy 3 – 1 in the final in Oporto. It was his second time as a European champion to go along with a couple of World Championships and two European club titles.

For the past two seasons, Rodriguez has had his own make of indoor shoe, provided by sponsors Kelme who’ve been involved with the indoor game for many years.

The ‘Javi Rodriguez’ shoe is made from a combination of mesh and synthetic leather with a professional EVA and rubber wedge outsole and rotation point.

The perforated heat moulded insole also helps to prevent perspiration build up, an important feature if you are on the pitch the day after 8 pints and a Ruby Murray.

According to the Football Association, Futsal is still in the embryonic stages of development in England.

Until the introduction of the first official National Championships organised by The FA in July 2003, it had been left to individual groups of futsal pioneers to develop the game in their local areas.

Kick-started firstly by the visit of the first international futsal team to English shores, when Tranmere Victoria hosted the Iranian National Futsal Team in October 2002 and then by the interest generated from a pilot futsal tournament hosted by Sheffield Hallamshire FA in the November of the same year, the Football Association began to put in place plans to take the game forward at a grass roots level in 2003 through the establishment of a National Championships and the participation of Tranmere Victoria in the 2003 – 2004 UEFA Futsal cup.

Also in 2003, an England team competied in their first major international competition in Malaysia and then the preliminary rounds for the 2005 Uefa Futsal Championships in January 2004.

Written By
Felipe
More from Felipe
Cancelled games and rubbish weather means Kyle hasn't been able to use...
Read More