Former Manchester United captain and Old Trafford legend Roy Keane has revealed that he believes Real Madrid got a good deal by bringing Cristiano Ronaldo to the club for a world-record fee of 80m. 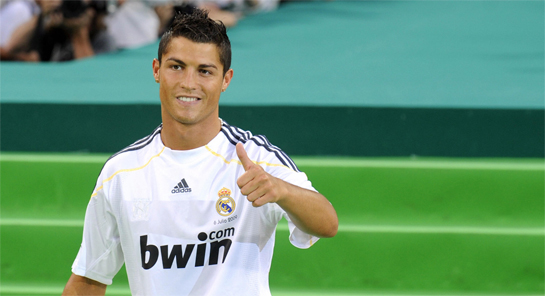 Thumb up. Ronaldo is happy with his cut of the 80 million transfer to Madrid.

Keane says that by looking at other players and what they go for, Ronaldo is relatively ‘cheap’ at 80m because he is ‘the best player in the world’. Football is one of the biggest entertainment industries around according to Keane and this means that there is no problem with the ‘top people getting the top money’.

It is clear that the Ipswich manager believes that big money transfers such as this are ‘just the way it is’ for the modern game. He also believes that Ronaldo is worth every penny, having played with him at Manchester United for a couple of years and witnessing his development as a player.

Keane’s notion that the money spent on Ronaldo can be justified with his performances is understandable. There is every chance that his arrival at Real Madrid could coincide with trophies being won by the Spanish club.

It is also a distinct possibility that Ronaldo could become a Real Madrid legend during his time there as well. The reception he received during his unveiling was incredible and if he can match this with his performances, it is safe to say that the 80m will be money well spent.

However, for Keane to say that it is ‘cheap’ can’t be taken too seriously. We are talking about a transfer fee that was 24m more than that of Brazilian superstar Kaka. If this is cheap, then there are a lot of clubs who should be worried about the financial state of football.

Nevertheless, Keane was simply highlighting his admiration for the talents of Ronaldo. He is of the opinion that he will succeed in Spain and that Real Madrid will benefit from forking out a massive 80m for his services.

Written By
Felipe
More from Felipe
We are trying to compile an up to date list of Premiership...
Read More