You’d normally expect the likes of Steven Gerrard, Frank Lampard or John Terry to be among the first celebrities to be photographed in any new England kit. But with regards to the England away shirt 2010 / 2012, that honour has gone to Kasabian front man Tom Meighan. 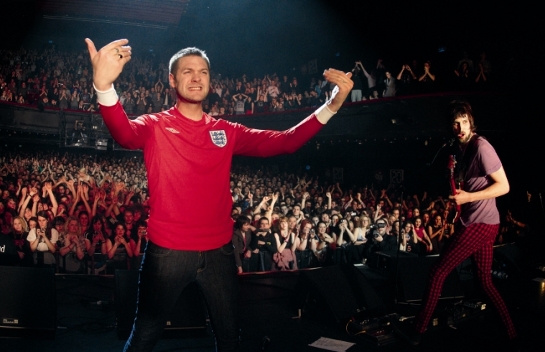 The band played a set in Paris last night and when they returned for their encore, Meighan ran on to the stage wearing the new Umbro shirt.

Speaking to The Sun, Meighan said:

It was a true honour to unveil the kit. It’s amazing, it’s like a shield. Because it is fitted, it feels like armour, made up of three different parts.

Capello even had a word on the design. He wanted it to be smart. That’s how football jerseys should be.

He also spoke to music magazine NME and said:

I’m the first person to wear it which is crazy. They said they wanted to take it away from the footballers for once and do something up to date. They wanted to combine with rock n roll. They’re two powerful things… I’m honoured to wear it.

Umbro are using the iconic images from the gig for a global advertising campaign, with Tom as the face of the England kit. They are the first band to launch a Three Lions kit and were chosen because of their love of the beautiful game.

The new kit will be worn for the first time on March 3rd when England play African Cup of Nations Champions Egypt at Wembley.

The away shirt has been created by acclaimed conceptual designer Aitor Throup, using a unique 3D form constructed specifically for this task.

As with the England home shirt, Umbro and Aitor worked closely with Fabio Capello and the England team in the development of the kit, in order to ensure that Umbro created a piece of Football Tailoring that was smart, stylish and instilled a strong sense of pride in the players.You can get your hands on the new England kit by clicking on the pre-order banner below.

Written By
Felipe
More from Felipe
Nike have filed a patent on an automatically tying lace system for...
Read More