Kaka has moved in a world-record £60 million transfer from AC Milan to Real Madrid. 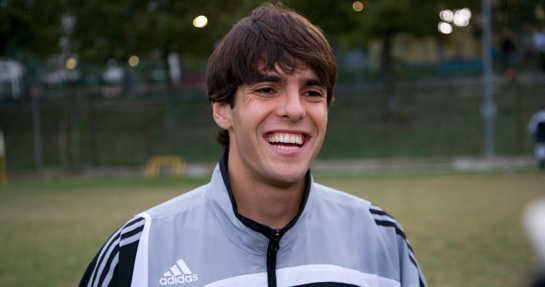 Real Madrid have confirmed the signing of Kaka from AC Milan for a world record fee of £60 million. The Brazilian had a medical yesterday in Recife, Brazil, where he is in training for Brazil’s World Cup qualifier against Paraguay tomorrow.

The 27-year old has agreed a six year contract and is the first player to join Real Madrid since Florentino Perez returned to the presidency of the club this month.

The official unveiling of Kaka in Madrid is likely to take place at the end of the month, after the Confederations Cup in South Africa. As Brazil refused to grant Madrid permission before the end of the tournament.

I hope to be part of this new project and help to win titles, both European and Spanish.

The only leftover details were the medical exams, and I’ve done them. The negotiations are closed and I have sealed my transfer to Real Madrid.

Everything I’ve always done for Milan has been by mutual agreement, from the moment I arrived until my departure today. I’m leaving by the front door. I’ve won everything that I wanted as a player and this is a new motivation for me.

Florentino Perez said that Kaka would be the first of several summer signings. His targets are also said to include Manchester United’s Cristiano Ronaldo and Liverpool’s Xabi Alonso.

Written By
Felipe
More from Felipe
Nike want YOU to decide what goes on Wayne Rooney and Ashley...
Read More