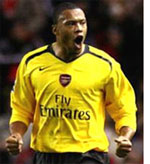 With a squad with an average age of 19, Arsenal’s on-loan Brazilian Julio Baptista was the pick of the Arsenal side – scoring four and missing a penalty.

Julio Baptista had this to say after the game…

“Today is very special for me and for Arsenal,” Baptista said yesterday.

“The team played a very, very strong game and after the match we’re happy.”