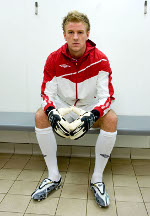 England will be without their first choice goalkeeper when they take to the field against Germany in the final of the European Under-21 Championships.

A bid to have Joe Hart’s booking for unsporting behaviour from the semi final rescinded has failed and so having picked up a caution earlier in the tournament, the new Birmingham City shot-stopper will miss the final.

Hart’s second yellow card was issued during England’s dramatic penalty shoot out win over Sweden while his first caution came for time wasting during the opening group game against Finland.

Either Scott Loach or Joe Lewis will play in his place. Loach played against Germany in the group stage when boss Stuart Pearce rested several players.

Written By
Felipe
More from Felipe
If you can't stretch to the price of the latest elite level...
Read More