Revered on the continent (especially Spain) for their leather-working abilities and heritage releases, we’re always a little wary of Joma’s synthetic efforts, which often smack of a ‘me too’ attitude rather than meeting their own high standards.

However, the Joma Super Copa has definitely turned our heads – and apparently we’re not the only ones.

The sharp-looking boot might borrow one or two ideas from other cleats on the market, but the wallet-friendly price ($74.99 in the US) and low weight point 220g have seen some decent uptake from players looking for something cost-effective and maybe a little different from their next pair of football boots. 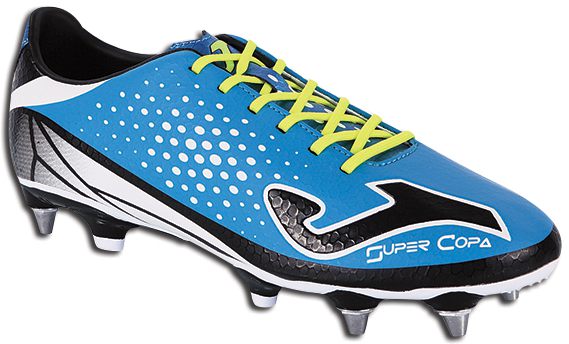 This Sharp Blue / White / Black colourway will definitely do the Super Copa Speed no disservice as we reckon this has bags of shelf-appeal.

Boasting a single-piece microfibre upper with a honeycomb textured finish for better ball control, the Joma Super Copa Speed might lack some of the firepower of some of the big boys on the market, but certainly looks a better prospect than some of the take-down models on offer.

Chuck in two-density PU studs for lightweight traction and even a hybrid-SG model for wet weather play, and the Super Copa is a pretty enticing package for less than the price of a pair of F30’s (with enough change left over for some astroturfs for training or some training kit).

You know the drill…

Joma Refresh Super Copa Speed in Sharp Blue / White / Black, 7.7 out of 10 based on 8 ratings https://www.footy-boots.com/wp-content/uploads/2014/07/joma-super-copa-speed.jpg

Written By
Kyle Elliot
More from Kyle Elliot
Footy-Boots gets stuck in with the latest in the FIFA legacy? Does...
Read More