It’s been a long while since we’ve had any news to report from Spanish brand Joma, so we’re delighted to see a guerilla start to life for the new Joma Numero 10 football boots. 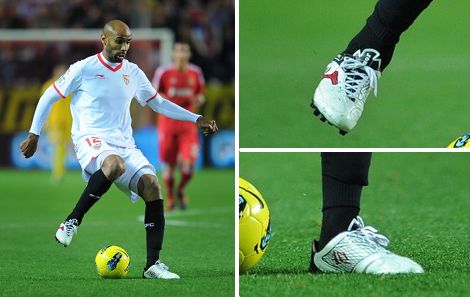 Given a debut on the feet of former Premier League star Freddy Kanoute as his Sevilla side took on Real Madrid, the new' Joma Numero 10 looked undoubtedly sharp on the pitch – even if it was denied a goalscoring debut as Kanoute came on as a second-half substitute.

In continental football, the number 10 is the position every young player wants to play; not the man spearheading the attack, but instead tucking in behind the striker, making things happen and delighting the fans with generous assists, clever play and audacious tricks.

No surprise, then, that the new' Joma Numero 10 focuses on the needs of the playmaker by slotting in to the en-vogue control category of football boots.

Similar to the Umbro Geometra or Nike CTR360 II, the Joma Numero 10 utilizes an instep control and distribution zone for deadly-accurate passing.

As a brand most famous for it’s traditional, leather football boots and incredible-fitting footwear, the new' Joma Numero 10 could be a surprisingly comprehensive package for those looking for an alternative to the big brands.

Watch this space, as we’ll bring you more details on the Numero 10 closer to it’s 2012 launch!

Written By
Felipe
More from Felipe
The Two Global Sportswear Giants Fight for the Right to Sponsor Brazil...
Read More