Chelsea Skipper John Terry could be set to suffer a second blow to his public image as Umbro are reportedly reconsidering their football boot sponsorship of the star, following his loss of the England captaincy. 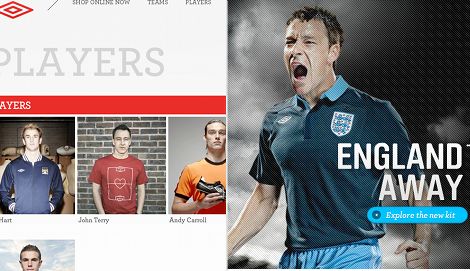 Terry is still on the Umbro website, despite what the papers say.

Terry, who faces allegations of racism directed at QPR Defender Anton Ferdinand, has worked in partnership with Umbro since he was just 18, but early reports from Umbro suggest the Manchester-based brand would be unlikely to meet the defender’s demands – should he ask for a more lucrative deal following the expiration of his current contract.

31-year-old Terry’s existing agreement with Umbro is set for renewal following this Summer’s European Championships, and whilst Umbro are quick to confirm that John is ‘Still an Umbro player’, no more statements can be made on future campaigns – leaving Terry in a precarious position.

Umbro have a strong presence in the current England team, with Andy Carroll, Joe Hart, Gary Cahill, Kyle Walker and Darren Bent all sporting the double-diamond, as well as being the official kit supplier to the Three Lions, so will likely want to retain Terry’s services, despite his axing as Captain.

Despite reports to the contrary, Umbro also still have Terry’s images on their website, appearing in the section for sponsored players and promoting the new England Away shirt.

What would you do in Umbro’s shoes? Is Terry worth his reported £4m boot deal?

Written By
Michael D
More from Michael D
The Magista 2 is designed to advance touch on pitch with an...
Read More