England No.1 Joe Hart could well be the next capture from PUMA, who seem to be continuing their hot-streak of signing up some very desirable players to wear their football boots and goalkeeper gloves.

The Manchester City stopper had long been rumoured to leave Umbro behind following their sale by Nike in late 2012, following other players such as Darren Bent, Connor Wickham and Real Madrid’ Pepe into the Swoosh’s boots.

However, Hart threw a curveball this past weekend, turning out for England training in a pair of the new PUMA evoPOWER 1 football boots, and matching gloves. 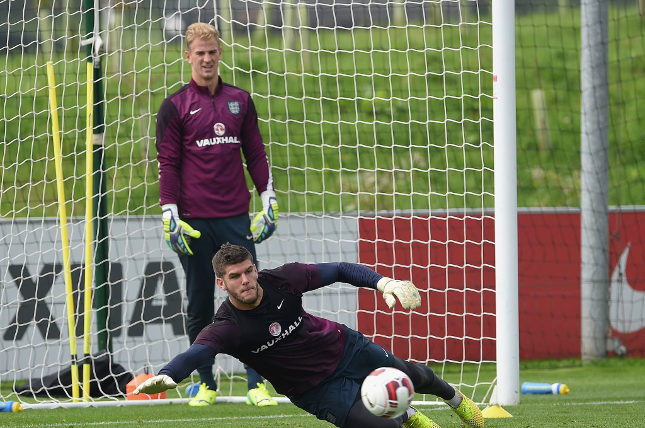 Having turned out in Nike Magista’s for England’s friendly with Denmark, it was a definite shock to see the former Shrewsbury Town ‘keeper rock up to training in the latest evoPOWER colourway.

With England’s first competitive match since the World Cup beckoning tonight, it will certainly be interesting to see if Hart continues to wear PUMA football boots in action against Switzerland.

Would Hart be a Good Fit for PUMA?

+ …He was probably England’s most marketed star in the run-up to the World Cup, Joe Hart appeared in promotions for Nike, Hugo Boss, Head & Shoulders and Doritos – making him a good asset for PUMA to use in future campaigns

+ …Hart might not be ‘Forever Faster’, but his fiery temperament on-pitch and outstanding performances in-goal certainly make him the sort of troublemaker Balotelli and Bolt are looking for in their new ad.

+ … PUMA are desperate for more talent in the England squad. Despite a raft of new signings in the last four years, PUMA can only boast Adam Lallana in the current England crop. An assured starter for the Three Lions, Hart would be a valuable mainstay for the brand in the crucial English demographic.

+ …. PUMA might want to consider a new Goalkeeper for their stable with Gianluigi Buffon likely having played in his final World Cup.

– … PUMA sponsor neither Manchester City or England, making it harder for them to use Hart in extended promotions as they do with Balotelli and Reus.

As you can see, there’s plenty of reasons PUMA might take a chance on Hart – but what do you think?