For many, the most solid of England’s positions going in to this Summer’s World Cup is the least glamorous: the goalkeeper.

No longer the young upstart, Joe Hart is now one of the more experienced heads in the England camp and a nailed-on first choice when England open up their summer campaign in Manaus.

But after an early-season dip in form, how does a goalkeeper of Hart’s status shoulder the pressure, brush off the mistakes and steel the nerves to see home a title-winning campaign? We asked the man himself to find out…

FB: How do you handle the pressure and stay positive before a game for England?

JH: Really, it’s just about going through the training and the preparation; looking at the various strikers we’re up against.

Sometimes we’ll look at penalties before the game and try to put myself in the best frame of mind to go out on the field and be confident in what I’m doing.

FB: Do you prepare differently for away games with England, compared to when you’re at Wembley?

JH: I suppose it’s different for some of the levels that you play at. You know some teams are going to come and defend.

But that’s football, it’s concentration and there’s not too much you can do for that. You’ve got to be prepared for every single thing that could be thrown at you; every team is capable of scoring goals at the end of the day.

JH: I suppose my England debut. If it wasn’t my debut, it was the first qualifier I played against Bulgaria. It was a big moment for me.

It was a moment when the Number One spot was up for grabs. I felt we had a good game and we moved forward from there and qualified for the Euros from that group.

FB: Was Gordon Banks’ save for England against Pel© the biggest ‘Hart Rate Moment’ for an England ‘Keeper?

JH: Yeah, it was an amazing save and it’s nice that a save gets recognition like that as they tend to go by the wayside unless it was a penalty.

But that save was talked about more; it was an unbelievable save against one of the best players to ever play football.

FB: How does a goalkeeper bounce back from an early mistake?

JH: Yeah, you’ve got to – life goes on and the game goes on. Nothing stops just because you’ve made a mistake.

You’ve potentially got another 90, 92, 93 minutes to deal with it if it’s in the first couple of seconds. So, more important than feeling sorry for yourself is you’ve got to get on with the game and try to play to the best level you can. 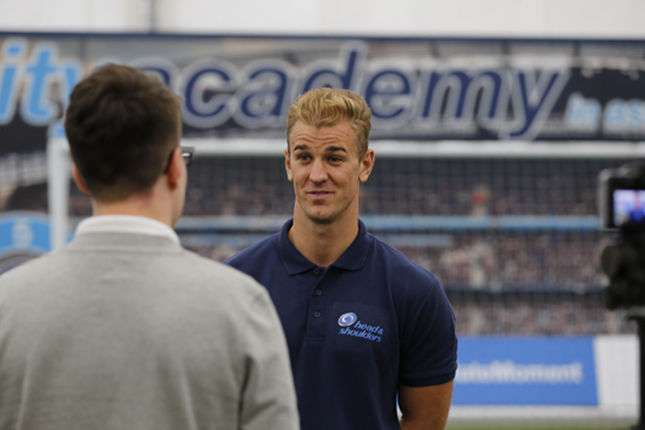 FB: Are there any of your Manchester City team-mates you’re looking forward to facing at the World Cup?

JH: Yaya [Toure] informs me that if it all goes the right way we could be playing against each other in the next couple of rounds.

Obviously there’s no-one from the qualifier [groups], but he’s the first one we could go up against if all goes well.

FB: We couldn’t let you go without talking a little about your boots; tell us about the Umbro Speciali’s you’ve got on today…

JH: Yeah, very comfy! Like you say, I’ve been in them for nearly ten years now. They’re just me, they’re normal and what I associate with football at the moment.

FB: Have you kept any special boots from memorable games?

JH: I think the only pair I’ve kept is the pair I wore in the FA Cup final when we beat Stoke.

FB: And if it comes down to it, will you be happy taking a penalty for England at the World Cup?

JH: Of course! It’s only twelve yards and I kick balls every day! I’m confident I can put it in the tight place over twelve yards.

Joe Hart is the  ambassador for head&shoulders €Hart' Rate Moment campaign which is all about illustrating the importance of preparation in order to feel confident in a heart racing moment.  To find out more search #HartRateMoment

Written By
Kyle Elliot
More from Kyle Elliot
As worn by Gareth Bale at his Real Madrid presentation, adidas give...
Read More