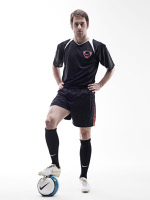 Congratulations to Roman Maltsev-Jones from Swansea in West Glamorgan who has won the Nike / Footy Boots Joe Cole competition.

Roman correctly answered that Cole scored a total of 3 goals in England’s recent matches against Czech Republic, Andorra and Croatia.

Roman and a friend will now have the chance to meet the England and Chelsea midfielder, along with a specially invited audience, at Nike Town in London later this week.

Thanks to everyone who entered (and we had emails from as far a field as Australia, USA, Canada, China, Japan, Thailand, India and Europe) and keep an eye out for more great prizes and future Footy Boots competitions.