Despite a stream of new goal-scoring talent bustling into the changing rooms at White Hart Lane, Jermain Defoe is the Spurs striker setting the records at the moment – recently breaking the club’s European goal-scoring record.

An almost career-long F50 wearer, we caught up with the opportunistic striker to see what he made of the latest – and lightest – adiZero to emerge from the adidas labs.

They get lighter and lighter each year, the colours change a bit. These are really comfortable, really light – yeah, they're really good!

I suppose the most important thing for players is that they're comfortable and yeah – these are really comfortable.

– You've worn F50's your whole career, how have you noticed the change in performance?

The F50's have always been light but never this light. I pull off my boots after a game and thing Surely, these can't get any lighter', but they've sent me some of the prototypes up to the training ground and it's unbelievable.

Years ago I used to wear leather, but now I don't think twice about this synthetic, the colours, too – it's always changing. 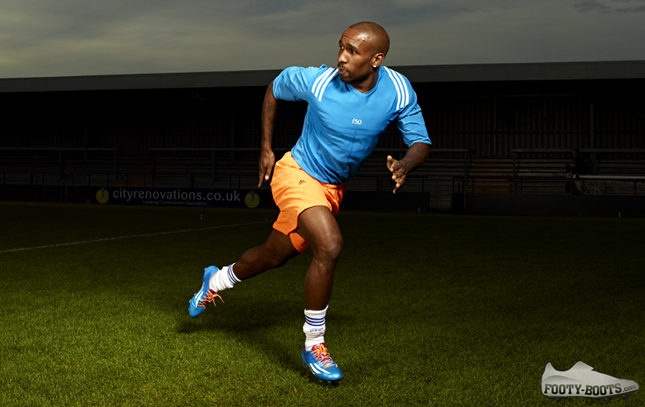 – Spurs had a massive year in the Transfer market, how're the new signings bedding in?

To be fair it's an easy changing room to come into as all the boys are nice. The new guys, they've come in, they've got their music on in the changing rooms already and everyone's having a laugh.

But the most important thing is to get results, and we're doing that. We're scoring a lot of goals and not conceding many, so it's looking good – we're having a good start to the season.

– We've been having a look at the new World Cup Ball today – the Brazuca – have you had a chance to get your hands on it yet?

I had a look at it before [in the photoshoot] before and it looks really good – I'm really looking forward to getting it. We're actually going to get it and have a chance to have it at the training ground before the World Cup which is obviously important.

Personally, I really like it. When you first see it, it looks really good – I love the colours

Written By
Kyle Elliot
More from Kyle Elliot
The new Nike Bomba Finales are the stars of the show in...
Read More