Japan entered the game as underdogs but soon found themselves capitalising against an ultimately confusing Cameroon side. 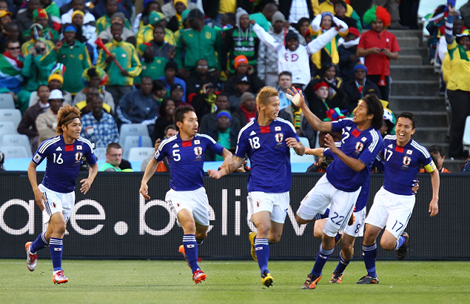 The first half of the game was one of few chances, Japan‘s passing oriented game seemed in perfect contention to the Cameroon team who struggled to find an outlet from the middle of the park.

A chance did come, though, 7 minutes before half time, when Keisuke Honda brought down a high cross smartly inside the far end of the 6 yard box and tucked inside the the Cameroon goal with his Mizuno Wave Ignitus.

From there Cameroon desperately struggled to find a way past a solid Japanese back four – many spectators were completely bemused at Cameroon coach Paul Le Guen’s choice to leave captain Samuel Eto’o isolated on the right wing, where many felt the Inter hitman could have been the key to unlock the blue defence.

All in all, Lions fans will be disappointed to lose by a solitary goal – and frustrated at Le Guen’s instance to keep Eto’o out of the line of fire for the whole 90 minutes.