The new Premiership season is practically hours away from commencement, and that means it’s nearly time for the Nike T90 Seitiro – the official Premier League ball to take centre stage.

So, we caught up with Manchester City and England’s James Milner to see how he likes the new ball, as well as his CTR360 II football boots and Manchester City’s title chances! 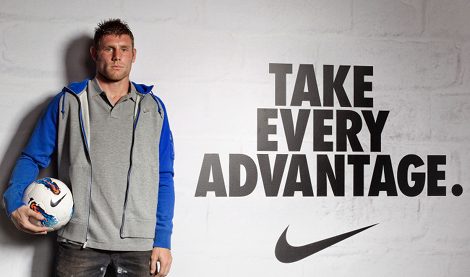 What difference does a ‘top’ football like the Nike T90 Seitiro make to your game as a professional?

As a player, you’re playing in different competitions all the time – and using different balls. You just want that continuity.

Playing with it myself, I notice the ball seems to fly a bit more consistently. The only time you get a ‘wobble’ on it is when you catch it a bit differently with your foot – but that’s a problem for the keepers really. For outfield players, it’s a great balance – it doesn’t feel to heavy or light like some of the others.

Footballs seem to be causing a lot of controversy over the last couple of years – do you guys talk about different balls after matches and training? Which one do you prefer out of all the footballs you use?

The ball we use in the Premier League is the one players like the most – it’s true. Speaking to them, it’s definitely the preference.

For outfield players and goalkeepers, I think everyone prefers playing with this ball. The consistency is important, and the fact that Nike have kept the design similar over years makes it much easier to settle back in for the new season.

Do you sometimes miss the simple old leather footies from days gone by? Or do you like the technology of balls like the Nike T90 Seitiro?

Technology has moved footballs on a long way – and I hope technology will keep making the game better! 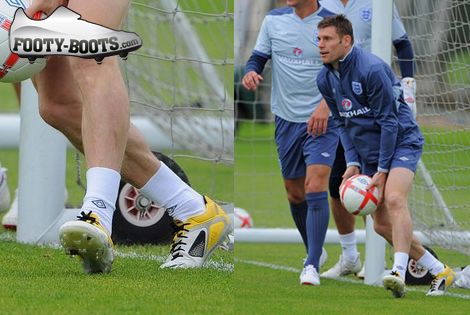 As we’re Footy-Boots.com, we have to ask you about your football boots, James! Tell us about why you like the CTR360 II…

I like the CTR360 a lot. I think it’s the perfect balance, it’s not too heavy and it’s not too thin; it gives you a bit of protection. A lot of the other lads have boots where I don’t think I’d feel as protected, but the CTR gives me that sense of protection and stability that I need.

And do you have any custom tweaks added to your football boots?
Yeah, I have a couple! The CTR is generally made with a blade on the bottom, but I have a round mould. I like to think it maybe reduces risk of injury, so I have a different plate on the bottom.

I was in between sizes – 8.5 and 9 – so they’ve made me sort of an ‘8 and three-quarters’, and after some problems with my little toe they made them a little bit wider for me. Little things like that!

They’re the tools of our trade and the most important thing we wear, so it’s important!

Nike are always releasing new football boots – have any of the new Nike colourways caught your eye?

I like the look of the new Tiempo, I think it’s a nice looking boot!

You used to wear the Tiempo back in the day, what attracted you to them?

Like I said with the CTR, they’re a good all-around boot, and are comfortable.

You look back over the years at the old Tiempos, players like Cantona used to wear them and they’ve only gotten better. 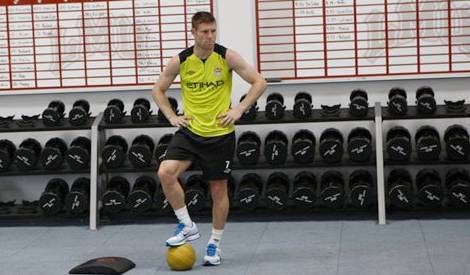 How’s pre-season going for you and the team?

Pre-season’s going very well! We’ve had a two-and-a-half week tour in America, played a few games out there which is important.

Pre-season is all about getting your match-fitness back, and – while you can do as much running as you want – match fitness is about playing games. So to, get games is important.


Last weekend you won the Dublin Super Cup, how much does it mean to win a pre-season tournament like that?

Even though they’re ‘only’ friendlies, we’ve been getting some good results – we beat Inter at the weekend – and you take that confidence with you into the season.

If you go into the new Premier League season on the back of some good results with confidence high, then it can give you that 1-2% lift you might not have if you’d have had a poor pre-season.

You mentioned your pre-season tour of America, including a match-up with the LA Galaxy – did you get chance to speak to Becks much?
I didn’t get to see him before or after the game – so the only time I got to speak to him was on the pitch!

He’s always very kind though, he left me a signed shirt in the dressing room – I thanked him afterwards on the phone. He’s a top player and he’s done great for the American game. 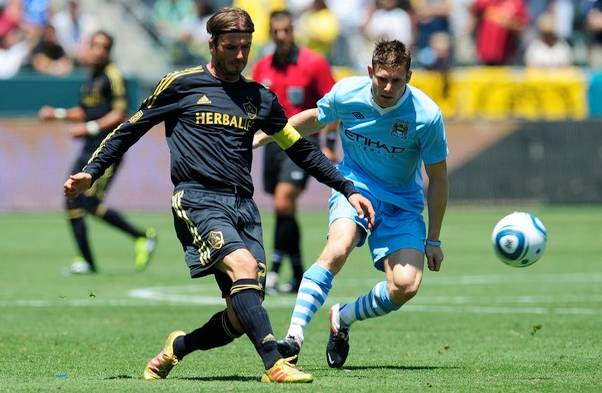 Even though you’re playing in the Premier League and an England international, is he still a hero?

I remember playing against him at Old Trafford in one of my first games, he’s one of the best players in the world and a great role model to have in the sport.

Manchester City have made some key signings this summer – how’re they settling in?

I think we’re all settling in now. Sergio Aguero’s only been there a couple of days, but he seems like a great guy with top ability.

Savic and Clichy have been there a bit longer, and they’ve been on pre-season with us for the two and a half weeks in America and come to Dublin. To go on tour and live in each others pockets really helps people get to know the other lads a bit better and help them into the team.

Be honest though – as much as you’ve enjoyed touring America and winning trophies – can you wait to start the new season?

Not really! Because noone really likes pre-season!

The season ends and you’re already thinking about pre-season. I think the feeling with most is that you put the work in and get pre-season out the way so you can get back into playing games in the League again.

The Nike T90 Seitiro is the new official ball for the Premier League season 2011-12; tested, developed and used by the best players in the world,'  for the best league in the world. ' Visit www.nikestore.com/football

Written By
Kyle Elliot
More from Kyle Elliot
Nike brighten up the T90 range with their brightest, boldest Laser yet!
Read More