The adidas adiPower Predator is picking up endorsees left, right and centre! England U-21 and Everton star Jack Rodwell joins fellow stars Kaka and Nani in switching to the boot, and he reveals to exclusively why he made the switch to Footy-Boots.com! 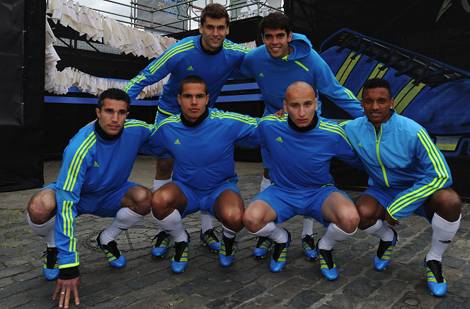 We caught up with the young Midfielder moments after he stepped off the stage at the launch of the new adidas adiPower Predator football boots in London, for a quick chat about all things Predator…

Hi Jack, thanks for speaking with us today – what were your first impressions when adidas first gave you a pair of the new adidas adiPower Predator?

I was really surprised, as for me – it’s about comfort. I put them on straight away before training one day and they were really comfortable.

As a Predator, it’s not something you expect, but they’re a lot lighter than what they usually are. It’s changed a lot and the technology just keeps getting better; I was really impressed!

Speaking of technology, you used to wear the very traditional adiPure football boots. Do you have any preferences between the two?

Well, the new Predator is designed to aid ball control and with it being a Pred, it’s renowned for offering better swerve and things like that.

Like you say, I wore adiPure for a couple of seasons which I really enjoyed – a bit more traditional, more old school! But they’re both good and it just depends on what you prefer.

Which of the two adidas adiPower Predator launch colourways do you prefer? The Sharp Blue you’re wearing today? Or the Traditional Predator Black/White/Red?

I’m going to say the blue! I prefer coloured football boots; though usually I wear white boots. I think the blue and yellow is a great contrast and it obviously goes well with the Everton kit, so, I’m happy!

These are the lightest Predators ever – do you think light football boots are a fad or are they something that really makes a difference to a player?

It can be mental for a lot of people, but I do think it does help. I prefer to wear light boots, but nothing too light – I want a bit of protection.

You do want to feel quick on your feet though, able to move a bit sharper – I’m sure it makes a difference.

You’ve said before you were always a Predator player as a youngster – how do you like the way adidas have developed the range over the years – and crucially – do you miss the fold-over tongue!?

Yeah, they used have a bit of velcro on it – I used to love them! I think the ’98 World Cup ones were my absolute favourites, but having been out of the Predator for a little while, I’m a bit out of touch with how they more recent ones have performed.

Your European debut against SK Sigma was one to remember with two awesome long-range strikes! Do you think we’ll see more of those now you’re in powerful boots like the adidas adiPower Predator?

I hope so!! Yeah, with boots like these, maybe I can bend ’em into the top-corner next time!

How far in advance do adidas give you a pair of new football boots to try out?

Well, I got these at the beginning of the year, adidas told me to try them out, train in them and make sure I was comfortable in making the change from adiPure to adiPower because they wanted me to do that – which I was.

Last question – you’re one of the most promising midfield talents in the Premier League, who would you love to have in midfield with you?

I think, Cristiano Ronaldo or Kaka. Definitely one of those two.

Kaka’s here today, you were on stage with him a moment ago, have you had chance to meet him?

Yeah, he’s a really nice guy – and a great player too!

And with that, we wished Jack the best of luck for the last game of the season and for this summer’s European U-21’s Championship.

Written By
Kyle Elliot
More from Kyle Elliot
Who will be getting a pair of Nike Superfly II's signed by...
Read More