It’s quite possible that Fabio Capello and David Beckham went out for a bit of a ‘Jabulani‘ after the World Cup finals draw in South Africa on Friday.

After being matched in Group C alongside the USA, Algeria and Slovenia, it’s understandable that they may have wanted ‘to celebrate’ which is exactly what the word Jabulani means in the Bantu language of IsiZulu. 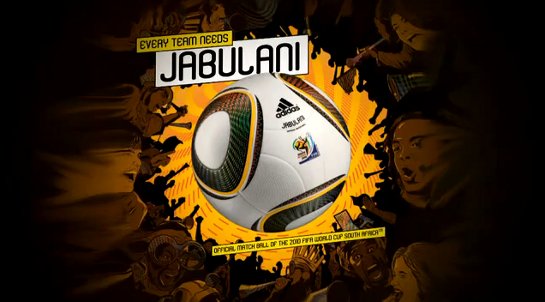 The official World Cup ball for 2010 was launched officially just a few hours before the draw took place. It already looks set to be one of the stars of the tournament with its revolutionary design and true flight capabilities.

It’s already a favourite of Germany and Chelsea star Michael Ballack who said:

Fantastic, the ball does exactly what I want it to.

Let’s hope that by that he doesn’t mean knocking England out in the second round!

So while Ballack has already got to grips with the ball on the testing pitch, other adidas stars including Jermain Defoe and Robin Van Persie have also been introduced to the adidas Jabulani in this new viral.

There are more videos on the official World Cup ball in the Footy Boots video section, including a test of the Jabulani by England and Chelsea’s Frank Lampard.