The Football Association of Ireland have announced today that they intend to keep the current Umbro home shirt for the duration of the Euro 2012 tournament in Poland/Ukraine next year. 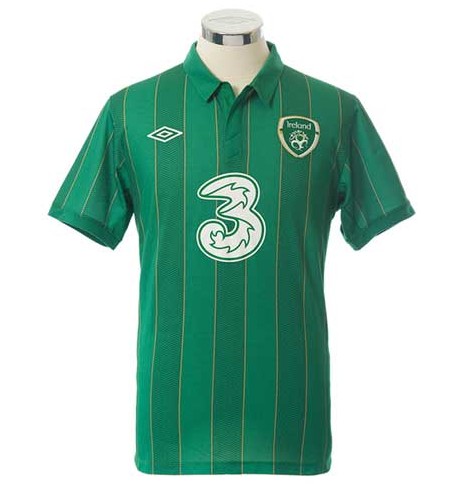 The FAI received widespread criticism for replacing their last home shirt after a mere 12 games in the previous year’s model, but are now looking to win over fans by confirming that the current, striped Ireland Home Shirt 2012-2012 will, indeed, be the one that the boys in green will wear in next summer’s European Championships.

The FAI would like to take this opportunity to inform all Ireland fans that the senior team will continue to wear the current Home kit for the 2012 European Championships. With the Christmas period coming up and presents being purchased so we wanted to clarify the situation for you all.

Whilst the same statement did also confirm that there would be a new training and leisure range launching in March, we think this is an admirable move by the FAI and certainly goes a way to repaying some of the faith shown by fans who bought the Ireland Home Shirt 2012-2012 before the Senior team had even qualified for Euro 2012.

Ireland, like the rest of the qualified teams, will be waiting with baited breath to see who they are drawn against this Friday.