Whilst the team here at Footy-Boots.com would never dream about hanging up our boots (despite the wishes of our team-mates¦) it’s easy to see why adult participation of the beautiful game hit a lull a few years ago. 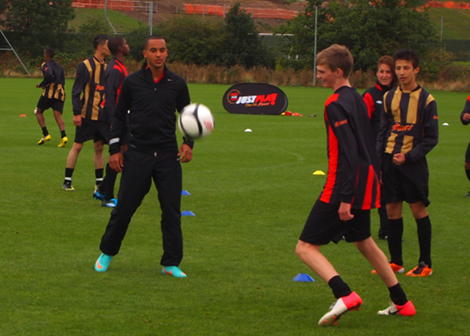 The rise of the five-a-side centre has made small-sided football a more convenient, less committal option for players in a world of rising cost of participation and travel. A 40 minute match to the same place every week is also a more realistic option than 90 minutes on a pitch for players with kids or time intensive jobs.

That’s before you even set foot on a pitch, where you’ll face stress, physical exhaustion and aggro from a bunch of guys you don’t know (and who already don’t seem to like you very much).

But if there’s one footballer on the planet who can make you forget all the negatives, it’s Arsenal’s Theo Walcott. 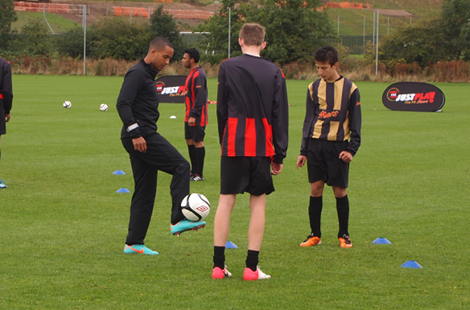 Outside on a cold, blustery day at a training pitch in Barnet, Theo Walcott slips into a fresh pair of the new Retro Nike Mercurial Vapor VIIIs for a kickabout with two teams of young footballers as an ambassador of the FA & Mars & The FA’s Just play initiative, which has seen 90,000 adults lace up their boots at one of 150 Just Play centres across the country, and helped to combat the barriers to entry we described earlier.

Speaking at a press conference earlier, Walcott spoke about his Just Play experiences; having visited centres up and down the country the Arsenal star spoke about the lack of judgement, pressure and just enjoying the game.

Something that translated into Walcott’s already easy-going demeanour once he had a ball at his feet on the pitch; whilst most 16-20 year old footballers would be eager to show their claim as the ‘best’ on the pitch, having an England International in their midst was undoubtedly humbling for even the most egotistical of Ronaldo-wannabes in the crowd, as everyone looked to exchange a pass or catch a kick up from the speedy forward.

Once even the most self-serious footballer realised they were no longer the best player on the pitch – they started to (dare we say it…) have more fun.

After the session, Walcott wrapped his hands around a cup of tea and set down to answer some questions with us about getting into football, the new-look Arsenal and, of course, football boots.

Which of your Arsenal team-mates would still be a mad footballer, even if they weren’t a professional? Who loves the game that much?

I think I’ll got for Aaron Ramsey, he just tends to kick a ball about all the time. Every time he sees a ball he’s been trying to practise the ‘wobble’ we call it – that Ronaldo sort of technique.

He’s always trying it and he’s¦. not close. Not close at all, yet!

But he’s always got a ball at his feet, kicking it around, he loves it.

It’s a scheme aimed at older players – have you ever been tempted to get your dad down for a kickabout?

I used to play a lot with my dad and my brother. In fact, my dad once gave away a penalty and got concussed. He actually got up and saved the penalty, but he can’t remember anything other than waking up in hospital that afternoon!

The Arsenal dressing room has changed a lot in the time you’ve been there, what’s it like at the moment?

I feel like the oldest player in the dressing room, to be honest! It’s great having different nationalities, different countries in the same place – but now you’re seeing a lot of young talent coming through the ranks and getting that step into the first team dressing room.

Everyone’s into the same sort of things, too – everyone in the squad likes messing around on video games, playing golf – especially the British guys. You look back to the Arsenal of old and there were so many British guys there when they one loads of trophies.

It’s not just about the British players, though, the foreign players all settle in very well and speak great English – it’s a good community, and I think it’s only going to improve. 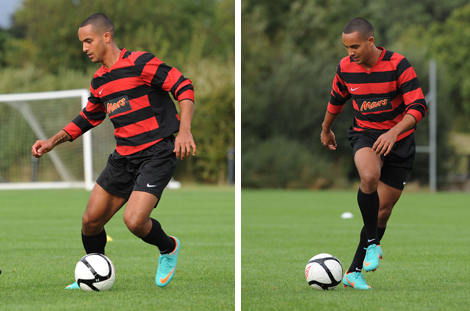 With Podolski, Giroud & Gervinho all capable of playing in wide and central positions, do you think that’ll help you rack up your goal tally this season?

Without the focal point of Robin van Persie, do you think the goals will be shared'  amongst the forward players this season?

Yeah, I think that will play a part. The goals won’t'  just come from Robin, I set up quite a lot of his last year and I think people will start to stand out a bit more – hopefully I can be a part of that.

Arsenal have been unlucky with injuries over the years, Abou Diaby is a great example – how has the team benefitted from his return?

Abou is like a new signing – he actually signed when I did, but he’s been so unlucky with injuries.

He’s started off the new campaign very well, he’s very strong and he’s got great feet for a big man – he’ll hopefully do really well for us.

There were some great pictures of you and Alex Oxlade-Chamberlain with Jack Wilshire on his return to training – are you looking forward to his return to the team?

The likes of Jack, that’s going to take time – he’s been out for such a long time, but I can see that he hasn’t lost his touch or anything like that.

At the moment, he just wants to get whacked on the ankle – he wants to be kicked!

It’s the way he is, he wants to get rid of that mental block – it’s like me when I did my shoulder, I wanted to get tackled, hit the floor and see how it’d react.

He’s been PFA Young player of the year, and he’ll be like a new signing for us. We have lots of great players, but Jack spots things that no-one else will spot. His left foot is great, which is handy for me as he looks out to that side and spots my run. People compare him to the Iniesta type; flair, nice touch – he’s got all of that, but we’ve got to be patient as it will take time.

Alex Oxlade-Chamberlain has risen to prominence over the summer – do you guys have a friendly rivalry when you’re off the pitch?

I’m probably better than him at FIFA, golf too. He’s my partner at golf so he does need to step up his game – my back does get quite heavy at times (laughs)! He’s a great lad and he can definitely hit it further than me, that’s for sure – but my second shot is better than his! 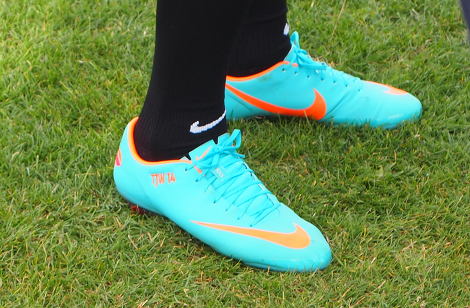 For people getting back into football – what would you tell them to look for in a pair of football boots?

Well, I would have to say Nike Mercurial Vapors are probably THE best boots!

The colours are a bit mad, but a lot of the younger players these days like the colours.

If I’m being honest, I think more people than ever tend to look at the boots these days, so if you’re not sure stick to the basic black ones – or wrap them [brighter boots] up in something!

How are you enjoying the Vapor VIII’s? Are they your favourite to date?

I do like the Vapors – especially at the moment they do them in a mix of studs and moulds, that’s what I wear. It’s best of both worlds!

They’re very light, and they’ve changed the material recently. The stand-out colours are something I know a lot of young players like when they go for this type of boot.

The way it’s developed over the years they’ve just got better and better and it’s going to improve, too. A lot more players are wearing the Vapors lately, so they’ve got to be doing something right, that’s for sure!

What were your first pair of boots?

I think I had the Michael Owen Umbro’s – the boots he wore when he first came on the scene.

I think I’ve still got them, but I’ve changed the studs and they’re too big now – I had really big feet when I was younger, size 7 or 8 that I still wear now – proper clown feet!

I can’t remember the actual name but I will find out!

The FA and Mars are offering a week of free Just Play sessions from October 8th. Search online for Just Play