Whether it’s on the pitch or in the pundit’s chair – Robbie Savage doesn’t shy away from a challenge.

But this time, the Twitter-tastic former Welsh international isn’t going into a 50/50 tackle or aerial battle – he’s representing football itself in the Transform Your Patch campaign!

Robbie is representing 5 a side football pitches and is battling it out against other celebrities to win a prize fund of £100,000 for pitches across the UK. He will be drumming up public support and encouraging people to vote for a 5 a side football pitch in their region and support his team by visiting www.transformyourpatch.com.

If Robbie’s team gets the winning amount of votes then 5 a side football pitches will benefit from the £100,000 prize fund.

We caught up with the former midfielder at the launch to see what his campaign tactics are, and chat a little about boots, of course!

FB: Start us off by filling us in a little on the ‘Transform Your Patch Campaign”

RS: I grew up playing on 5 a side football pitches with my mates. Being involved in ‘Transform Your Patch’ means that I can help ensure that the next generation of footballers have clean, all weather facilities to play on, just like I did when I was younger. 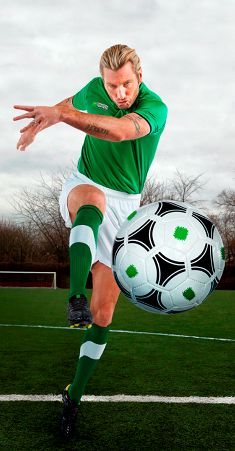 5 a side football pitches are such an important part of the community because they give footballers of all ages a place to practice their skills and have fun when they compete.

FB: How about the place where you trained growing up? Is that in need of some transforming?

RS: It funny you should say, I took my little boy back there not too long ago and it’s really worse for wear. The fence has been ripped apart, the goals were broken and it was just a mess. It got me thinking that the place I played growing up was now a scrap-heap.

So, when I got asked about this it was such a good opportunity from Pepsi Max to transform five-a-side pitches across the country.

It’s also a competition – which I love!

FB: Speaking of which – Are you worried about any of the competition?

RS: Well there’s Fazer from N-Dubz transforming skateparks – would you rather be a footballer or a skateboarder? Answers it’s own question really…

Emma Wills is doing picnic areas – no disrespect but I can sit down and eat an apple anywhere!

Denise van Outen’s on the Playground areas – which is fine – but most people can have stuff like that in their garden now.

FB: Fighting Talk! How would you used to prepare for a game before you played on your patch when you were younger?

I always had my boots clean on a Friday night – I never played with dirty boots!

I used to play with plenty of players who used to pull their boots out their bag and they were caked in mud from the previous week!

Always turn up early too – I used to turn up early and put the nets up with my father, I don’t know if you still need to do that!

And always enjoy it – just that freedom of playing with no pressure in local leagues.

FB: Great tip, Robbie – you don’t have to tell us twice! Speaking of boots, what were your favourite boots from your playing days?

RS: I liked the adidas adiPures. I had Puma too – they were my sponsor for 6-7 years, and they were great boots.

FB: So it’s fair to say you’re a traditionalist when it comes to boots?

RS: I had the new Nike Tiempos for for a while, but I couldn’t do with them – they were more for the flashy, scorer types at the time.

When you’re in the midfield, going in for tackles  – I’d always want a traditional boot!

FB: Your Twitter banter is the stuff of legend, did you ever give anyone any grief about their football boots in the changing room?

RS: I couldn’t! I was always wearing red, blue – White when I was at Crewe! My manager used to say ‘You’ve got to be a good player to wear white boots’ – I think I ended that!

FB: With all the boots on the market today, what would you recommend to a grassrotots player who’s buying a new pair of boots?

RS: My little fella is at that age where he always goes for the brightest, the newest, the most colourful.

If you ask me, you can’t go wrong with a pair of classic adidas’!