The Football Association of Thailand (FAT) has elected to change the nation’s home shirt colour from all red to yellow shirts complimented with white shorts.

FAT secretary-general Ong-art Korsinka said yesterday the FAT had informed FIFA of the change while the all blue away kit remains unchanged. “We performed well last year in yellow shirt and won the SEA Games so we decided to make it our uniform for home games.”'  FIFA has approved the change, he added.

Elsewhere, Adidas have signed a football kit deal with The Russian Football Union. The sum of the contract is to be revealed soon, though is expected to be in the region of 100 million euros. The new deal concludes the Russian partnership with rival brand Nike. 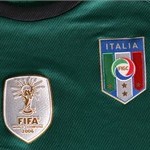 Reigning world champions Italy have been presented the very first “Fifa World Champions Badge”. From now on every victorious World Cup nation will receive one of the exclusive badges. Italy will be able to wear the badge until the next World Cup tournament, where they will have to defend their title. “Italy have the honor of being the first team in the history of the World Cup to wear Fifa’s new badge. It is a source of great pride for the whole of Italian football,” said coach Marcello Lippi.

After the midweek international fixtures, club action returns. For all the latest information on football shirts, make sure you click on over to footballshirtculture.com.