It’s been a while since we’ve had a good boot-spotting piece here on Footy-Boots.com, so we thought checking out what the top footballing stars have been wearing in international training would prove to be wise, and we’ve uncovered some real gems for you to check out! 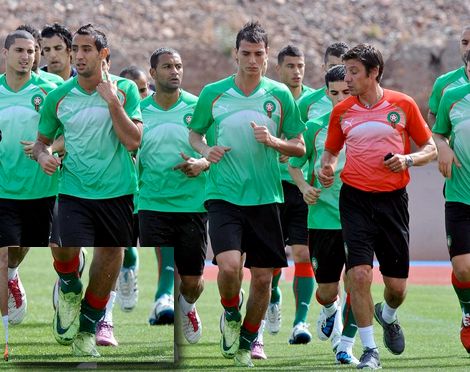 Despite a red-hot start to the Premier League season, Moroccan forward Marouane Chamakh has gone off the boil recently, to but it lightly!

It might not be such a surprise, then, to see that the former Bordeaux striker has tried to re-discover his scoring mojo in a pair of old football boots!

Whilst playing in the French league, Chamakh was notoriously loyal to his Citron Mercurial Vapor SL’s – refusing to change out of them, even for the Superfly! 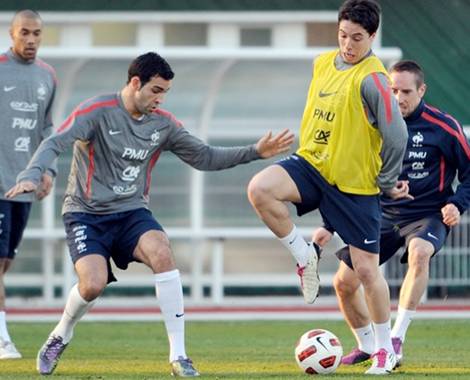 Sticking with Arsenal players – tricky midfielder Samir Nasri is another who perhaps feels he’s not been chipping in with the goals as regularly as he did around Christmas.

Having worn the synthetic adiZero Prime recently, Nasri surprised us by training in the leather adiZero, which weighs *GASP* 30 grams more!

We wouldn’t expect this to be a permanent change though, many players often train occasionally in a ‘comfort’ pair of football boots to give their feet a bit of a rest, and that’s exactly what we think Nasri is doing here! 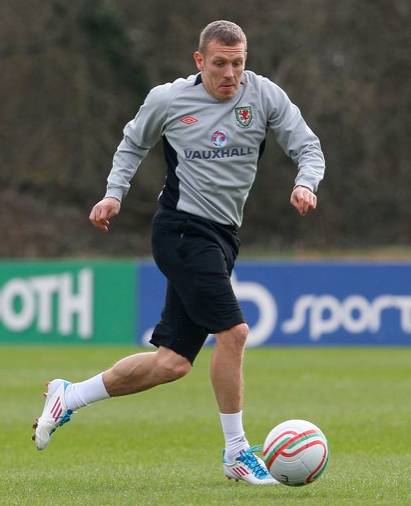 Another adiZero spot comes on the feet of Cardiff City’s Craig Bellamy. The neckless Wales striker has spent most of his career as a dedicated Nike-wearer for most of his professional career, but seems to have made the switch to the adiZero.

Bellamy joins a growing list of former Mercurial men who have opted for the lightweight construction of adidas’ top-selling football boots. 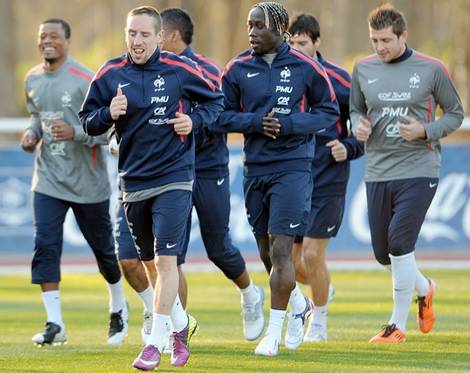 One Mercurial player who we’d expect never to switch is Bayren Munich’s Franck Ribery, who steps out for the first time in the new Superfly III.

Should Ribery participate in France’s Euro 2012 qualifier against Luxembourg this weekend, it will mark the pacy winger’s first time in a France shirt since an ill-fated World Cup campaign that saw himself and several other key players suspended.

Whilst some French fans might not welcome the 27 year-old back with open arms, Nike will certainly be relishing seeing one of their top players in their latest football boots and one of their latest international kit.

Frank Lampard – England – adiPure IV
Another Frank looking to win over some doubters this week will be Chelsea’s Frank Lampard, who is back in the England squad after captaining the Three Lions against Denmark last month.

adidas seem to have pulled off something of a coup, however, by getting Lampard into the drastically under-represented Scarlett Red adiPure IV‘s.

Thanks to his loyalty to Chelsea, we imagine that a pair of red football boots might make Lamps the subject of serious grief around Stamford Bridge – but adidas look to have convinced the midfielder that it’s okay to sport Red on international duty! 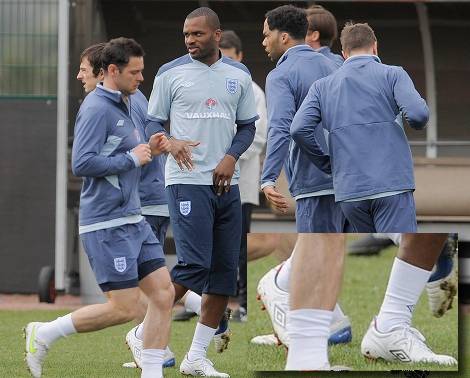 Darren Bent has made a happy habit of bagging goals for the Three Lions in his Umbro Speciali, but now it seems that the Villa striker is ready to upgrade to a newer model of football boots for his latest appearance in a white shirt.

The journeyman striker is spotted here in the new Umbro Speciali R at England’s London Colney training ground as he prepares for a qualifying match against Wales.

Umbro seem to have decided now is the time to get the Speciali R to the forefront of their range, as fellow England star Joe Hart is also warming up in the first synthetic Speciali – which is just as well as the Speciali R has been grossly under-worn since it’s reveal back in January. 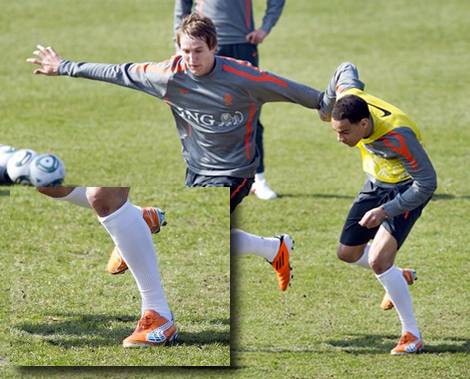 Another under-worn pair of football boots is the Puma v1.10 in Fluorescent Orange/Blue Aster – which has barely even registered on pitches since it’s launch last month.

Just as well, then, that Puma loyalist Van der Wiel has decided they’re a perfect match for his Holland kit and has taken it upon himself to wear them.

The Ajax right-back is just one of a large number of player who choose to lop off the lace cover of the v1.10, and having seen Loic Remy in the new v1.11, we can’t help but wonder how players who prefer exposed laces will deal with the new wrap-around tongue.

That’s all for now, but rest assured we’ll be keeping our eyes peeled for any interesting football boots choices during the International match-ups for the rest of this month.

If you spot any yourself, just hit the ‘Got a Story’ button at the top of the homepage and let us know!