Going to the Pub to watch the games tonight? Before you leave, make sure you memorise these exemplary stats from our friends at Castrol, and you can become the footballing-stats master that you always wished you could be!

Or you could get told to shut up while everyone watches the game!

In fact, save them for half-time. Yeah, that’s best.

England, Scotland and Ireland are all in Euro 2012 qualifying action tonight, against tough opposition in the form of Macedonia, World Champs Spain and Slovakia respectively.

Looking to Scotland first, Castrol Performance analysis shows that midfielder Charlie Adam has been instrumental in Blackpool™s surprising start to their very first Premier League campaign, attempting more shots and creating more chances than any of his team-mates.

The set-piece specialist has already scored twice this season in the Premier League, with both goals coming from the penalty spot. The Tangerine captain kept his composure to help his side achieve two crucial away wins – at Newcastle and Liverpool.  11 of the 15 shots mustered by the former Rangers player have come from outside the box, which is not surprising considering that he held the record of most long-distance goals last season in the Championship (seven).

With the Scots losing 1-0 away to the Czech Republic courtesy of a rather disappointing performance on Friday, the in-form Adam, still yet to be used in Scotland™s UEFA EURO 2012 campaign, would surely give his side a much-needed attacking edge. 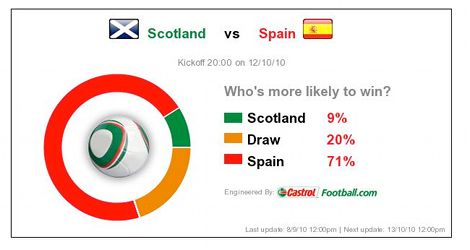 Onto England now, who are taking on Macedonia in what could be a frustrating tie for the Three Lions, though the inclusion of Manchester City’s Adam Johnson would certainly benefit Fabio Capello’s men, according to Castrol’s performance data!

The former Middlesbrough starlet has also been in impressive form for Manchester City in the league this season, netting once and creating a chance every 54 minutes on average. Of the widemen named in Fabio Capello™s squad, only late call-up Stewart Downing has netted more often than Johnson in the league while Johnson™s minutes per shot and minutes per dribble rates are significantly superior to any of the other wingers.

However, it is with England in the UEFA EURO 2012 qualifiers where Johnson has really excelled in recent months, creating two goal-scoring chances and completing 80% of his dribbles along with a two-goal haul. With Theo Walcott and James Milner both out of action with injuries, along with Aaron Lennon, Johnson now has the chance to cement his place in Capello™s first 11. 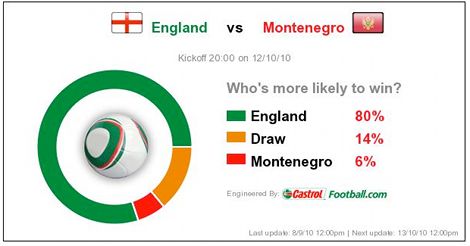 Finally, Ireland are in action against Slovakia – where Castrol predict that Aiden McGeady will be the key to unlocking the notoriously stoic Slovakian defence – with the tricky wideman embarking on the highest number of dribbles per game (on average) in Russia™s top tier this season. 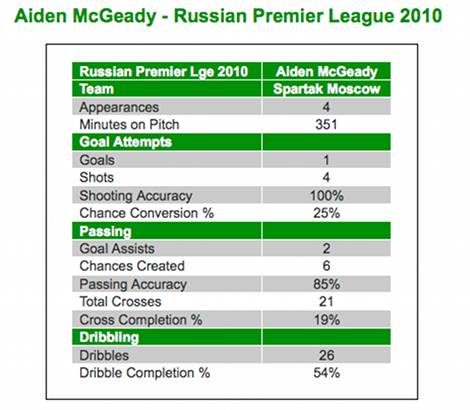 The 24 year-old attacker moved to Spartak Moscow after having spent his entire career at Celtic and hit the ground running. Indeed, McGeady has already been involved in three goals after just four appearances in the Russian top flight (one goal and two assists), displaying an impressive 100% shooting accuracy and completing 85% of his passes.

The skilful Irish international has also attempted a league-high 6.5 dribbles per game. In the 3-2 defeat at the hands of Russia in Dublin on Friday, McGeady was one of the home side™s better performers, firing in a game-high three shots on target, with one of those attempts leading to Shane Long™s goal for the Irish. The former Celtic man will also be central to the Republic™s chance of success against Slovakia, in a game which now has increased significance following the defeat at the Aviva Stadium. 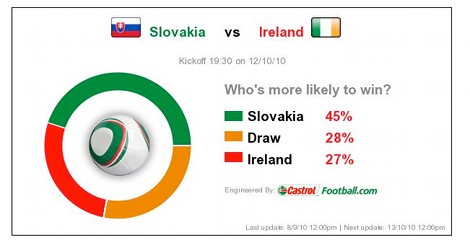 Written By
Kyle Elliot
More from Kyle Elliot
The Speciali 4 and Geometra II are set to see out the...
Read More