Following on from their innovative campaign to hype up the England squad for the usually-boring end of season friendlies on home soil, Nike continued to pass messages of support from fans of the Three Lions in weird and wonderful ways during their trip to Brazil this weekend.

As well as placing sneaky Tweets on Wayne Rooney’s pillow and a (rather nice) beach soccer ball on the sands of the Copacabana, our favourite of Nike’s hidden messages was placed on Alex Oxlade-Chamberlain’s boots. 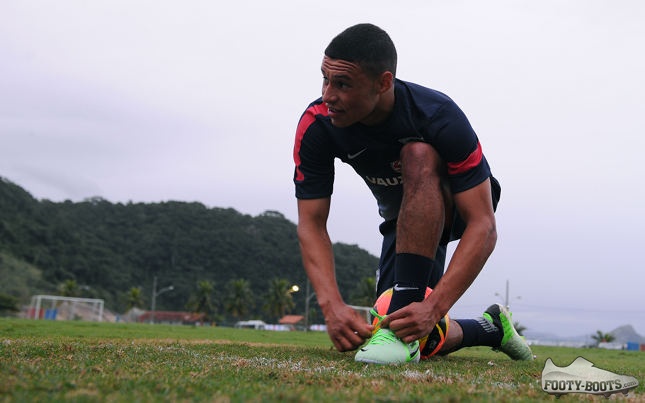 The Arsenal starlet first discovered the message from @BenWilko93 on his Fresh Mint/ Neo Lime CTR360‘s at England’s Urca military base training ground at the foot of Sugarloaf mountain.

And it’s clearly something the youngster took to heart, scoring a fine goal to bring England level in an intimidating Maracana stadium, before Wayne Rooney gave the Nike Hypervenom Phantom a debut goal to remember in the 2-2 draw that saw the Three Lions debut their first Nike Away shirt.

We’d love to carry a subtle message on our bootlaces onto the pitch with us, as the Ox did at the weekend – what about you guys?

Rather than just a few characters stitched into your boots, you could have an inspirational quote, tweet or even song lyrics to pick you up when you’re down-and-out in the 85th minute.