Most of the larger boot brands will often boast that they’ve had the consultation of the biggest names in football in developing their new boots.'  The paying public is told why a football boot is made for a particular player or players and, should you buy it, why it will make you play like them.

However, I’m sure I’m not the only one who watches some players and thinks one of two things;

1. That the football boot they’re wearing really is perfect for the player, or

2. That there’s another football boot out there that they really should be playing in.

Starting the list of players in the former category, Theo Walcott is the very definition of the values of the Mercurial Vapor line; a low-profile, sleek unit built with only speed in mind. Both the Vapor and Walcott might not have the best touch and accuracy around but I don’t think that bothers their fans – it’s all about reaching top speed as fast as possible and leaving the opposition wondering what just happened.

Next is a player that’s been the flagship of his football boot since it’s first incarnation: Wayne Rooney and his Nike Total 90 Lasers. For clarification, I’m not talking about the sleek Air Zoom Total 90’s– famously favoured by Luis Figo – I’m talking about the Lasers; tuned for power and accuracy, a real heavy hitter who’s courted a fair share of controversy; that doesn’t care too much about being the first to the ball, more about taking the rough and tumble and powering the shot to where it needs to to be. All of that could be said of both the player and the boot.

As a player who’s career has had to be reinvented so many times'  the perfect match for the Adidas F50’s has to be France and Sunderland’s Djibril Cisse. As Cisse played through his Liverpool career he opted for the first incarnation of the F50. Following his horrific leg break and loan move to Olympic Marseille, Cisse found a his boots, too, were undergoing a revision – now branded as TUNiT’s. Now, both the football boot and the player are notorious for their capabilities for speed, clean strike of the ball and last but not least their outrageously customisable uppers.

Cisse prefers them red, but here’s the latest F50 from Adidas, the Rome

Now for more comparisons, but this time football boots and players who, barring lucrative sponsorship and endorsement deals, would share a special kinship with some of the boots on the market today.

Paul Scholes is, to me, a pair of Umbro Speciali’s. Both are now stalwarts in their respective fields, and whilst certainly might not be to everyone’s taste, command a huge level of respect from their peers. Scholes is a player who has witnessed some of the best talent in football come and go around him and, despite the old addage about old dogs and new tricks, has taken little touches and pieces of play from his peers and added them to his game. Much in the same way that Umbro has seen many ideas from the bigger companies being implemented to their products, and quietly tweaked and refined their forgotten flagship into a classic boot with modern touches, continuing to be some of the best in their class. 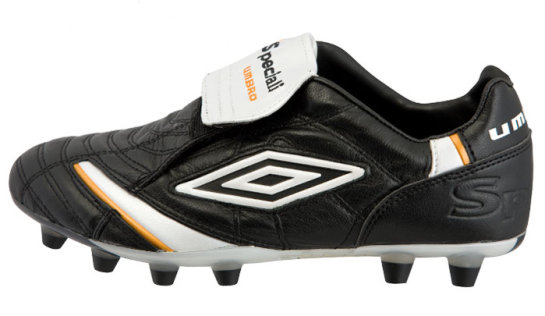 Looking across the Manchester United midfield is the illustrious Cristiano Ronaldo. The ‘Best Ronaldo of All Time‘ has a long standing love of the Nike Mercurial line, which dates back to when they were known by most as the ‘R9’s (a bit fateful given the recent results of a certain poll), so I’m sure I’m going to stir up some controversy by comparing the Portuguese winger to a pair of Concave PT-1’s. Over the last 18 months both have caused massive divide in the football world, moreso than perhaps any other player or boot. Whilst plenty won’t buy into the hype of either, there’s many out there who have no qualms about tipping their hats to someone who’s trying to do something a little different, be it stepovers or hunks of plastic. Coincidently, Concave are launching a new all-white colourway in time for the summer and rumours will inevitably suggest the Cristiano will be doing the same!

Cristiano Ronaldo is actually a Concave boot -surely you can see the resemblance?

Now, simply because I don’t want to the the only Footy Boots writer to not have any say on the Nike Mercurial Superfly, I present Michael Owen – the human Superfly. A hefty investment as the most expensive boot on the marketplace and the best paid player in the Premier League; It would seem both share a risk of potentially ruining themselves after a minimal amount of time on the pitch. Should that risk pay off, however, the opposition will find themselves with a tricky, speedy handful with only one objective in mind.

There’s plenty more comparisons out there and I’d love it if you’d drop a comment with some of your ideas – I honestly never knew the Footy Boots community was so massive until I saw nearly 5,000 votes in the recent Ronaldo poll!

So get involved and have your say on not just this, but all of Andy, Alan, Omar, Matt and James’ articles!

Written By
Felipe
More from Felipe
Kevin Keegan fully expects Michael Owen to stay at the club, beyond...
Read More