After a nightmare ACL injury at the start of the season, things looked touch-and-go for Dutch midfielder Ibrahim Afellay. But now back in the national team for Euro 2012, the Barcelona star is ready and raring to lace up his new Puma evoSpeed 1‘s for the first time.

We snagged this Q&A with the 26 year old ahead of the Netherland’s opening game in Ukraine. 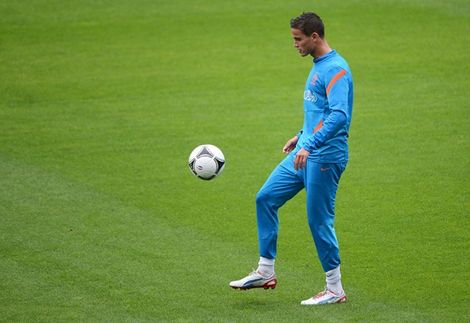 Affelay breaks in his new cleats

After your injury, you played for the first time in the Dutch team against Slovakia. How did it feel to be back?

It was very good. To come back like this, after such a long time is a very good feeling.

It must have been frustrating to see the other players playing whilst you were sitting on the bench recovering. How did you keep yourself motivated until you got fit?

You think about the time and the level you played at before. And you look into the future. I think those are the things that keep you strong. But it was definitely a very hard time for me.

Do you think this year it could be a chance for you to come back and show again the good player that you are?

Yes, I hope I will show it. I am getting fit right now and I play my games. So I will do everything  to be as good as possible in the upcoming season.

How is the mood in the Dutch squad? Is there the confidence that the team can go very far in the tournament like you did in South Africa? 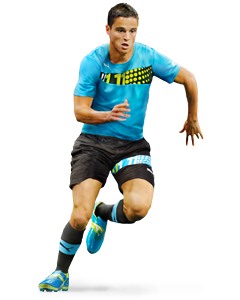 The confidence is good. But there are man other good teams as well. We are in a group that is very difficult, with some of the best teams that have also good chances to win the EUROs. Teams like Denmark, Germany and Portugal. All of the three are fantastic countries, so we have to give everything we can and we hope that we survive the first round.

Does the disappointment of losing the final in 2010 still follow you or is that rather seen as an added motivation to do better?

It gives us extra motivation to get better. To get to the final again is very difficult. But I think we have to look first to the first round, because that is obviously the first step.

You are going to play Germany in the group stages. How important is that game for the Netherlands in this tournament?

That is a fair point. But you know the current German team. How do you rate them anyway and what do you think are their strengths and weaknesses?

Germany is one of the best teams in the EUROs. Their quality is that they are always fighting, but in the last years they also played very good football. So those two qualities are a very good combination.

Who are the most important players in the Dutch team?

All 23 players are equally important.

If Holland by bad luck or whatever reason will not win the tournament, who do you think will win it then?

You are going to wear the new PUMA evoSPEED boot during the tournament. What is your opinion of this boot?

It is a very good boot. It is extremely light and very comfortable, so I am very happy with the shoe.

Is it going to make you faster?

Written By
Kyle Elliot
More from Kyle Elliot
After weeks of speculation, the FA have confirmed that Nike will become...
Read More