With pressure building ahead of the quarter-final matches and temperatures set to stay high in Kiev this week (25 degrees predicted), research by sports science experts working with official tournament sponsor Powerade shows that success in the knock out stages of UEFA EURO 2012 could rest on a team getting a drenching. 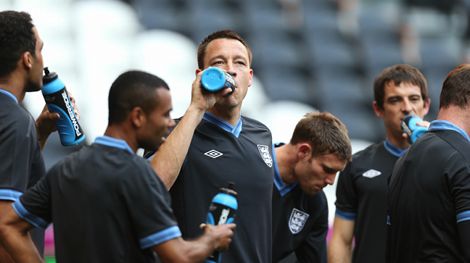 Now facing the possibility of extra time and penalties, managers will be keen to ensure that their top XI is as well-prepared as possible for the physical and mental challenge presented by longer game play and high pressure spot kicks.

Data suggests that by adopting the correct hydration strategy ahead of the quarter-finals, teams that usually play in cooler climates will be less likely to miss last gasp chances in the final moments of a game.

Powerade worked with Professor Ron Maughan, an expert in Sport and Exercise Nutrition, to review the effects on teams playing in warmer conditions than those they are used to.

They found that the benefits of a well-hydrated set of players after 120 minutes might be just enough to prevent a team from yielding to the pressures of spot-kicks.

For example, a team used to playing in average temperatures of 13 degrees on home turf could lose up to 3 litres of sweat in 90 minutes, the equivalent of about 4% of their body weight, if temperatures in the Ukraine remain at their current highs.

The data shows that in a game that goes to extra time players will lose even more fluid – up to four litres – leaving them open to the effects of dehydration and side effects that can impact on their performance late in the game, including a loss of focus, lack of concentration, fatigue and possibly muscle cramps.

Without a well-rehearsed hydration strategy, and especially if the games go to extra time, the teams could find themselves hindered by:

– A loss of concentration: players will be less able to focus on the game-play, less likely to create an opportunity to score goals and more likely to miss sitters as they struggle to keep their attention on the game.

– Impaired decision making: Quick decisions like avoiding a tackle or carrying out a set play become harder. Red or yellow cards become more likely as players’ judgement is weakened and mistakes are made.

– Decreased endurance: Players’ sprinting speed will be slower and they will feel like they’ve ‘hit the wall’ in a similar way to marathon runners. Cramp may also set in as vital salts are lost through sweat.

– Rise in heart rate: A player’s heart rate will be higher when dehydrated, by as much as 5-10 beats per minute. With the added pressure of a looming penalty shoot-out, a faster heart rate will make effort feel harder and hinder the players’ ability to think clearly without distraction. 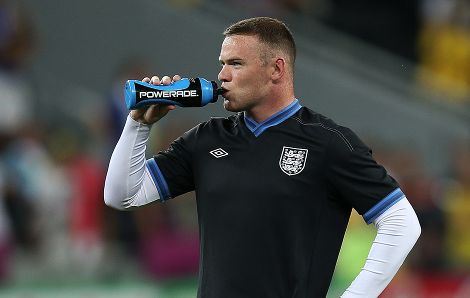 With many teams feeling the hurt from past penalty shoot-out failure in European Championships the advice to them is to prepare now if they want to stay sharp for the do-or-die knock out stages of the tournament.

“Going into extra time and potentially a penalty shoot-out knowing they have done everything possible to maintain a physical and mental edge over their opposition might just make the difference between success and failure.”

Powerade, official hydration partner of UEFA EURO 2012, worked with Professor Maughn to offer tips to help prevent the team getting hot under the collar at the quarter-final games.

– Refuel when opportunities allow with cool or chilled drinks: the carbohydrate in sports drinks can help.
– Keep the dressing room cool at half time
– Use cold and wet towels to cool down at natural breaks in the game such as stoppages and intervals
– In the event the match does go to extra time and penalties, take a drink as soon as the final whistle blows after 90 minutes or if there is little time, at least rinse their mouth with a carbohydrate sports drink

Written By
Kyle Elliot
More from Kyle Elliot
We're heading into London to meet up with Lionel Messi - and...
Read More