After taking a sharp turn into left field with a lightweight, synthetic football boot launch a two years ago, Hummel continue to prove there’s more to them than just classic leather football boots with a bold new limited edition release.

The Hummel Rapid X Blade Bluebird Limited Edition is a striking new look to their now-established Rapid X Blade silo, with a bold new colour palette characterising what is the brand’s first big move of 2015. 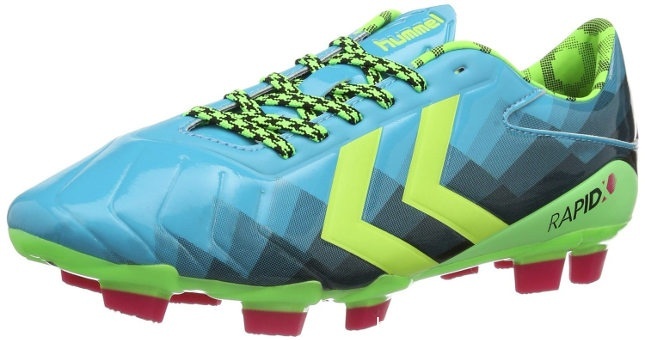 Whilst Bluebird might well be more associated with classic PUMA terrace footwear and Cardiff City, Hummel’s Bluebird is certainly a more visually arresting one.

Definitely modern feeling, the upper’s graphic is overlapping, graduating shades of blue, whilst the green soleplate laps up the sides and helps the sun-yellow chevrons pop.

The inside of the boot has a pixilated feature design, a pattern that is continued on the matching laces, making the whole boot look like it was inspired by Minecraft.

That said, the features are anything but a pre-alpha, as the Hummel Rapid X Blade Bluebird LE comes stocked with some killer features.

The upper is a single piece of Hummel’s new flagship synthetic, which is actually partially made from reclaimed and recycled material.

Hummel also cite ‘Cage Construction’ as a key component of the boot’s design.The chevrons on the flanks of the boot work with the soleplate, hell counter and lacing system to lock the foot in place and transfer energy more efficiently.

The sole of the boot continues that ethos; inside and out. The insole of the boot is lined with a FrictionLock technology that helps reduce rubbing, whilst a new bladed outsole improves ground penetration for more assured traction.

At 262g in a UK 8.5, these boots might be a band apart from the f50’s, Mercurials, Velocitas and evoSPEEDs of the world, but there’s definitely only one place you can get a boot with this strong visual look.

Hummel Rapid X Blade | Bluebird LE, 4.7 out of 10 based on 5 ratings https://www.footy-boots.com/wp-content/uploads/2015/03/hummel-rapid-x-blade-bluebird.jpg