Whilst we’ve seen plenty of big new releases so far in 2012, this might be the first proper ‘shock’ so far this year; a lightweight speed boot from old-school football boot-brand Hummel! 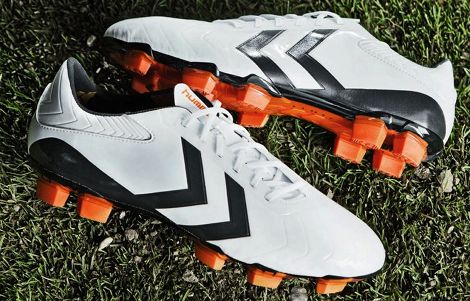 Danish brand Hummel are best known for classic football boots. So much so, their biggest seller is the appropriately-named ‘Old School Star’.

Whilst there can be little doubt over their contributions to the world of footballing footwear, the last thing we expected was that they have been secretly beavering away at a new ‘speed’ boot: the excellently-titled Hummel Rapid X Blade.

However, now that we’ve seen the finished product, we can’t say we’re not intrigued by the marriage of decades of Hummel craftsmanship and modern boot technology!

In a striking triumvirate of colourways based around a high-vis/high-tech Black / Golden Poppy Orange / White core of colours, the Hummel Rapid X Blade represents a foray into uncharted territory for Hummel. 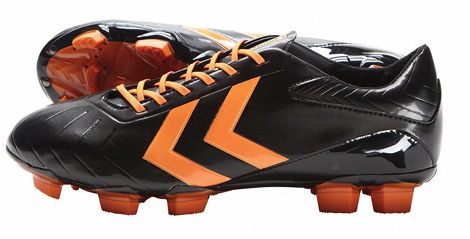 Utilising a synthetic, recycled microfibre for the upper, almost everything you can see on the upper is made from a one-piece material with minimal stitching; resulting in a neat look and an excellent fit.

Other technologies used in these football boots place more emphasis in good fit and comfort than weight reduction; the Friction Lock lining on the insole prevents foot slippage, whilst the Cage Construction heel counter cleverly employs the iconic Hummel chevrons to lock the foot in place and improve stability.

One factor that will bring a lot of people down is the weight of the Hummel Rapid X Blade; at 260g they’re almost 100g heavier than the miCoach adiZero – but hold up well when compared to the likes of the Umbro GT Pro II, Lotto Zhero Gravity Ultra and even the Nike Mercurial Vapor range in the 200g+ ‘speed’ category.

Expect to see the Hummel Rapid X Blade land around April, with a price-tag still TBC.

Do you think this could be the start of something big for Hummel?

Written By
Kyle Elliot
More from Kyle Elliot
adidas give their energy-enhancing Nitrocharge it's first ever taste of K-Leather on...
Read More